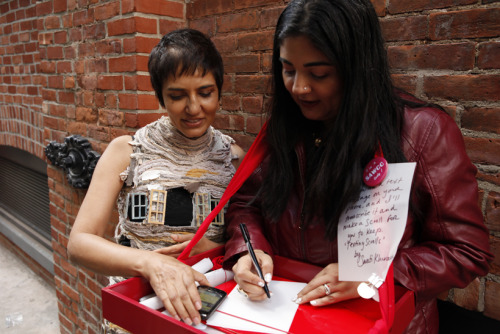 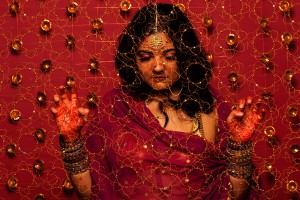 Swati Khurana was born in India and raised in New York where she currently lives and works.

She received a B.A. in History from Columbia University with a focus on South Asian post-colonial studies. From New York University, she received a M.A. with distinction in Studio Art and Art Criticism; there she also attended an intensive studio program at Instituto Universario Di Architettura in Venice, Italy. She is currently completing her M.F.A. in Fiction at Hunter College, part of the City University of New York.

Her writing has appeared in ­Columbia Review, Asian American Literary Review, Jaggery, Bloom, The Weeklings, Mr. Beller’s Neighborhood, The Feminist Wire, and has received an Honorable Mention in Glimmer Train’s Very Short Fiction Contest. She is a Kundiman fellow and is working on her first novel.

Khurana’s videos, collages, drawings, sculptures and installations mine personal narratives and explore immigrant issues with a focus on gender, popular culture, and the seduct ive promises made by rituals. She has as been an Artist-in-Residence at the Atlantic Center for the Arts, New Smyrna Beach (FL); Center for Books Arts, Cooper Union, Henry Street Settlement, Wave Hill, Rotunda Gallery/BCAT Joint Multimedia Studio (NYC); and David, Julia White Colony (Costa Rica). She was accepted into the Bronx Museum’s Artist-in-the-Marketplace Program, Aljira’s Emerge Program, and has received a New Visions Grant to research and create a site-specific video in Mexico City. In 2007, she was the the Inaugural Artist-in-Residence at the Kartong Village Development Committee (The Gambia, West Africa) and received a Travel and Study Grant from the Jerome Foundation, Art and Martha Kaemmer Fund. In 2012, she received an individual artist award from the Bronx Council of the Arts.

In addition to several community-based projects, she has served as an Artist-in-Residence through the Bronx Museum at Bronx International High School, a new public school serving recent immigrant and refugee students. In 1997, she was a founding member of the South Asian Women’s Creative Collective (SAWCC), a NYC-based organization dedicated to the advancement, visibility, and development of emerging and established South Asian women artists. She was invited, along with SAWCC founder Jaishri Abichandani, by StoryCorps to create an oral document about South Asian feminist arts organizing in NYC for the Library of Congress.