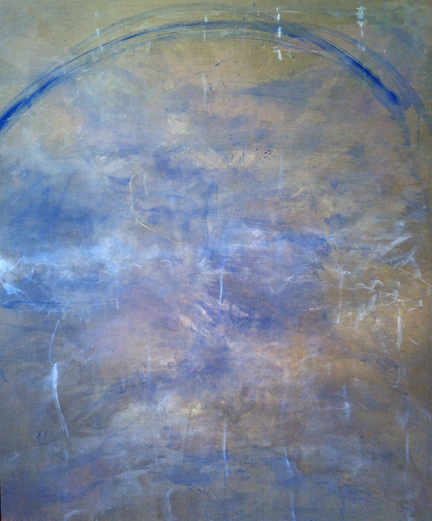 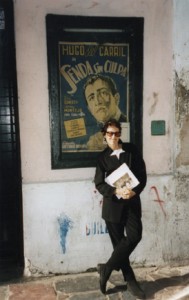 Susan Kleinberg is a New York-based artist. Her latest piece, KAIROS, derived from her work with the scientific team of the Louvre during 2012-2014, is currently in PROPORTIO at the Palazzo Fortuny in Venice for the 2015 Venice Biennale. “KAIROS” premiered as a work in progress at the Alliance Francaise Venice (situated at the Casino Venier) for the opening of the 2013 Venice Biennale.

KAIROS is a landscape of possibilities in deep migration, with images filmed through the Louvre’s high-resolution microscope from elements related to an enigmatic Mesopotamian figure. They are an avalanche of the possible, microcosm and immense in space, from the center of what we don’t know to the implications of imagination. Slowly unraveling beyond descriptive, they reach to an almost undulating, disequilibrating atomic level, in deep color. The unraveling images are an excavation through borders, an essential comment on location of perspective. The microscope functioned as an invisible facilitator.

Ms. Kleinberg’s work has been shown at four Venice Biennales, in 1995, 2001;2011; and 2015, as well as during the 2005 Venice Biennale,sponsored by the Istituto Veneto, the 2009 Biennale, sponsored by Telecom Italia, and the 2013 Biennale. In addition to Venice, she has exhibited at galleries and museums around the world.

Her large-scale installation, “Tierra Sin Males,” was installed during the 2011 Venice Biennale in the TRA: EDGE OF BECOMING exhibition at the Palazzo Fortuny, curated by Daniela Ferretti, Rosa Martinez, Francesco Poli and Axel Vervoordt. “Tierra Sin Males” was shown at the headquarters of Telecom Italia, the Cloister ofSan Salvador di Venezia, during the opening of the 2009 Venice Biennale. Kleinberg’s accompanying drawings on seaweed paper, paintings and prints related to the piece, were shown along with the installation in Venice at the Chiostro del Bramante in Rome in October 2009.

The 3D version of “Tierra Sin Males” premiered at Art Basel Miami in 2012, shown at the Regal Theater in South Beach. It was shown in 2013 at the LOOP Barcelona festival in Antonio Gaudi’s Casa Batllo.

“Tierra Sin Males” was also shown MAXXI in Rome, at the Buenos Aires Museum of Modern Art and at MAC in Spain, and at the Municipal Museum in Nicosia, Cypress during 2012-2013. Over the past four years, it was shown at the Fondazione Sandretto Re Rebaudengo in Turin, Fondazione Orestiade in Sicily, with a permanent installation at the museum Certosa di Padula.

KAIROS is the fifth high-definition projection piece Susan has developed over the past nine years, along with BLOOD ROLL, D-ROLL, P-SPIN and “Tierra Sin Males”, with related prints, drawings and paintings. BLOOD ROLL was shown first in November 2004 in Seoul, Korea, in a major international show at the Total Museum of Contemporary Art, curated by Young Chul Lee, commissioner of the previous Gwangju Biennale. In 2005, she showed BLOOD ROLL during the opening of the Venice Biennale, projecting it across the Campo Santo Stefano, Venice on the façade of the Istituto Veneto. Kleinberg installed P-SPIN at the Pulkovo Observatory in St. Petersburg, Russia in the fall of 2007, in an exhibition organized by Olesya Turkina, a curator from the State Russian Museum.

In these last four digital projections, a large glass globe seesaws tensely back and forth over a central fulcrum. The movements are both with and against any predictable laws of physics or nature. The globe rolls upwards, almost off the edge, catches, spins back, spins forward faster, spirals, hesitates, continues … the shadow, density, and reflection, contort and contract, shifting continually. The pieces speak to equilibrium/disequilibrium, of many systems, be they economic, political, environmental, institutional, physical or emotional. The pieces are led by deep reverberating sound tracks.

In 2003, Ms. Kleinberg mounted What Would Make for a Better World, a video installation for the “Future Democracy” exhibition at the Istanbul Biennial. In this piece she spoke with and photographed the least visible in society about what would make for a better world. The still photographs are joined to the moving sound on DVD, installed throughout the gallery space on monitors mounted on the walls. Hanging from the ceiling were painted Chinese fans with the photographs of the people in the piece embedded into them.

In 2001, she created Fear Not for the Venice Biennale, curated by Harald Szeemann. Fear Not was a video installation based around audio interviews about courage, which she did with people from every walk of life; from artist Chuck Close and President Bill Clinton to Gore Vidal, Albanian refugees, Spalding Gray, film directorSidney Lumet, domestic workers, former U.S. Secretary of State Madeleine Albright, Congressman and civil rights leader John Lewis, Gen. Norman Schwarzkopf,Evelyn Lauder; as well as interviews in Italian with a similar spectrum of people, from former President Silvio Berlusconi and Susanna Agnelli to fish sellers in the Venetian market. Following the interviews, Ms. Kleinberg photographed, or chose photographs of each of the individuals. These were linked to the audio track and installed on monitors, almost as Renaissance portraits, throughout the Arsenale.

There have been numerous exhibitions of Fear Not. It was shown in New York at P.S. 1/MOMA (2001–2002). Most recently it was part of an international exhibition on the subject of courage at the Fondazione Sandretto Re Rebaudengo in Turin. It was chosen as a Special Project for the Chicago International Art Fair(2002), was exhibited at the Neuhoff Gallery in New York (May 2002). Ms. Kleinberg showed related paintings and drawings at Venice Design Gallery, Venice, Italy (2001) and a preview installation at the Stark Gallery in New York (2001). In 2002 the piece was shown along with related prints at the Tasende Gallery in Los Angeles and the Tasende Gallery in La Jolla, CA; as well as at a benefit and lecture for the Skirball Museum in Los Angeles.

In 2002, Ms. Kleinberg did a piece at the Museo Nacional de Bellas Artes in Buenos Aires, for the Biennale of Buenos Aires and delivered one of the opening lectures.

Kleinberg prepared the Italian version of Fear Not for the 2001 Venice Biennale at the American Academy in Rome, where she was Visiting Artist in Residence; and where six years earlier she also prepared her “Sposalizio del Mar” installation for the 1995 Venice Biennale.

“Sposalizio del Mar”, whose reference was to the most important ceremony of the Venetian Republic, the Sposalizio Del Mar: the marriage of the Doge to the sea, floated in the Grand Canal between San Marco and San Giorgio. It was a bright yellow ring, based on the Apollo space capsule’s flotation collar, filled with the golden detritus of Venetian history to the present. An audio tape of people talking about living in relation to the sea accompanied it. The piece was ultimately sold to the Province of Lake Como.

The beginnings of all of this work were shown at the Castelli Gallery in New York.

In 1994, she installed a permanent piece in the board room of Human Rights Watch’s International Headquarters in New York. Ms. Kleinberg traveled to Aurangabad, India in the spring of 1992 at the invitation of the Sarabai family, who have invited artists for many years to live and work there for extended periods of time.

Complete information about her work may be found at www.susankleinberg.com.