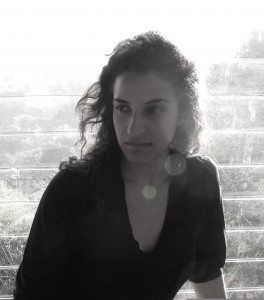 Odeya Nini is a Los Angeles based experimental vocalist and contemporary composer. At the locus of her interests are textural harmony, gesture, tonal animation, and the illumination of minute sounds, in works spanning chamber music to vocal pieces and collages of musique concrète. Her solo vocal work extends the dimension and expression of the voice and body, creating a sonic and physical panorama of silence to noise and tenderness to grandeur.

Odeya has collaborated extensively with dancers, visual artist, filmmakers and theater directors as both a composer and soloist and has worked with artists such as Meredith Monk, Butch Morris and LA’s contemporary orchestra – Wild Up.

Odeya’s work has been presented at venues and festivals across the US and internationally, such as The Hammer Museum, REDCAT, Joyce Soho and Art Basel Miami, from Los Angeles to Tel Aviv, Canada, Mongolia and Vietnam. She has lectured as a guest artist on contemporary vocal techniques and composition, leads workshops on voice and movement, and most recently was a composer in residence at the Banff Centre in Canada.

Odeya holds a BFA from the New School for Jazz and Contemporary Music where she studied with vocalist Theo Bleckmann, and an MFA in composition from California Institute of the Arts. Her debut album Vougheauxyice (Voice), for solo voice, was released in April of 2014 on pfMENTUM records.