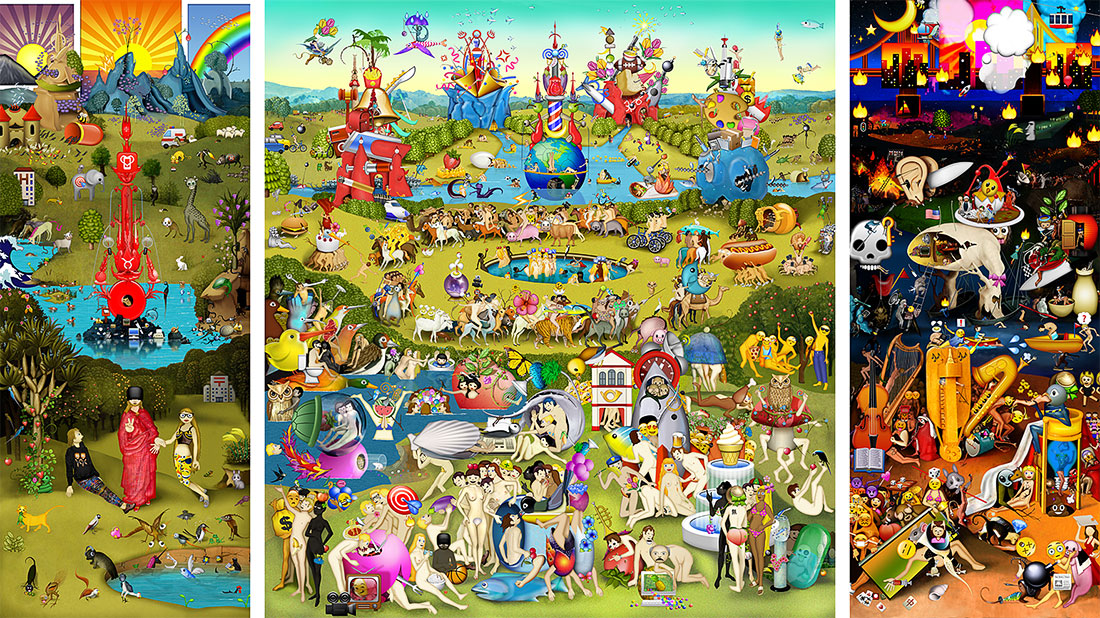 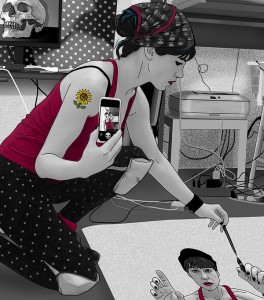 Carla Gannis, originally from Oxford, North Carolina, today lives and works in Brooklyn, New York. She received a BFA in painting from The University of North Carolina at Greensboro and an MFA in painting from Boston University. In the late 1990s she began to incorporate digital technologies into her work, and in 2005 she was awarded a New York Foundation for the Arts (NYFA) Grant in Computer Arts. Currently she is a professor and assistant chairperson of The Department of Digital Arts at Pratt Institute.

Gannis identifies as a visual storyteller. With the use of 21st Century representational technologies she narrates through a “digital looking glass” where reflections on power, sexuality, marginalization, and agency often emerge. She is fascinated by contemporary modes of digital communication, the power (and sometimes the perversity) of popular iconography, and the situation of identity in the blurring contexts of technological virtuality and biological reality.

Since 2003 Gannis’s work has appeared in 20 solo exhibitions and numerous group exhibitions both nationally and internationally.  Her most recent solo exhibitions include “The Garden of Earthly Delights” at The Hudson River Museum, Yonkers, NY (currently on view) and at Kasia Kay Art Projects in Chicago, IL, 2014. In 2013 she collaborated with poet Justin Petropoulos on a transmedia book, installation and net art project entitled <legend>   </legend>  published by Jaded Ibis Press, Seattle, WA and exhibited at Transfer Gallery, Brooklyn, NY.  Her forthcoming shows include the group exhibition “Porn to Pizza – Domestic Clichés” at DAM Gallery, in Berlin Germany and solo exhibitions at EBK Gallery in Hartford, CT and Transfer Gallery in Brooklyn, NY.

Features on her work have appeared in ARTnews, The Creators Project, The Huffington Post, Wired, Buzzfeed, FastCo, Hyperallergic, Art F City, Art Critical, The Wallstreet Journal, The New York Times and The LA Times, among others. Recently her speculative fiction was included in DEVOURING THE GREEN:: fear of a human planet: a cyborg / eco poetry anthology, published by Jaded Ibis Press. Her recent speaking engagements include “Let’s Get Digital” at the Metropolitan Museum of Art and “Cogency in the Imaginarium” at Cooper Union and at the School of the Art Institute of Chicago. She has participated in numerous panels on the intersections between art, technology, education and networked culture.

The Garden of Emoji Delights Triptych Animation from Carla Gannis on Vimeo.

The Garden of Emoji Delights – Eden 01 from Carla Gannis on Vimeo.