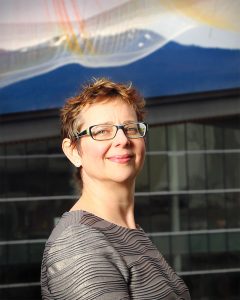 Janet Echelman is an artist who defies categorization. Her work intersects across the boundaries of Sculpture, Architecture, Urban Design and Planning, Material Science, Structural and Aeronautical Engineering, and Computer Science. She creates experiential sculpture at the scale of buildings that transform with wind and light. The art shifts from being an object to look at, to a living environment you can get lost in. Using unlikely materials from fishnet to atomized water particles, Echelman combines ancient craft with computational design software to create artworks that have become focal points for urban life on four continents.

Recipient of the Guggenheim, Aspen Institute Crown Fellowship, Harvard University Loeb Fellowship and Fulbright Lectureship, Echelman received the Smithsonian American Ingenuity Award in VisualArt, and was named Architectural Digest Innovator for “changing the very essence of urban spaces”. Her TED talk “Taking Imagination Seriously” has been translated into 34 languages with well over a million views. On Oprah’s list of “50 Things that Make You Say Wow!” Echelman’s art ranked #1.

Recent permanent commissions works include: 1.8 Renwick at the Smithsonian American Art Museum; Impatient Optimist, a new ionic piece for the Bill & Melinda Gates Foundation campus in Seattle giving visual from to their mission; Water Sky Garden, a legacy project of the 2010 Vancouver Winter Olympics; Her Secret is Patience for downtown Phoenix; and Every Beating Second for San Francisco International Airport.

Echelman’s educational path has been nonlinear. After graduating from Harvard College, she lived in a Balinese village for 5 years, then completed separate graduate programs in Painting and in Psychology. This year she received an honorary Doctorate of Fine Arts from Tufts University.