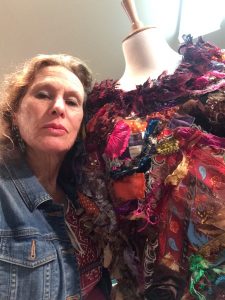 Ginger Balizer-Hendler is a Long Island Based artist, whose vibrant primitive work is based on her love for storytelling. In 2013, Ginger received an artist residency at The Vermont Studio center, where she completed  a 17 1/2’ canvas,The Adventures of Gingerella, based on a recent journey to India.

In 2014, The Adventures of Gingerella and the Peaceful Planet Project , an art installation, was featured as part of The East End Arts Council’s JumpstART program to revitalize downtown Riverhead, New York. The multi-media installation featured her love for Indian miniatures and the Buddhist concept of ahimsa( sanskrit for non-injury), inviting viewers to participate through poetry and performance. 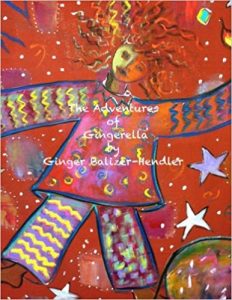 Her recent book, The Adventures of Gingerella was published in November, 2015 and she is currently working on an opera based on this work.

Her recent series of paintings is evocative of ancient symbols and mythology inspired by her travels to India and Morocco. Mother Earth’s Party Dress, a mixed media piece, received an Award of Merit from the Long Island Biennial in 2012. She was featured in the 2014 July/ August issue of Long Island Pulse Magazine and is a former contributing writer for Art Times.

Most recently, Ginger was interviewed for My Long Island TV by Waldo Cabrera, featuring her innovative mixed media art dresses. She is continuing work on her Dreamscape paintings as well as exploring the dress as art form, through the use of fabric and hand stitching.