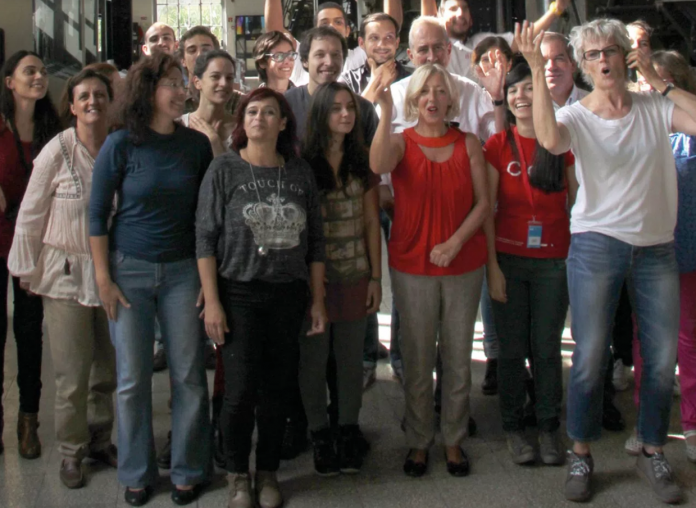 Ann-Marie LeQuesne is a London based artist who stages performances with groups of people in public places. Her invitation to participate is an open one. Ideas may start with a phrase, a response to an image, a location, a situation. What if this action happens in this place? The actions are simple, but often disrupted or altered by their location. Recent performances are increasingly concerned with the role of intentional, structured sound in the work.  The live performance is a rehearsal, a series of “takes”, in which LeQuesne works with participants to see what is possible. The action is filmed or photographed and becomes material for a subsequent restaging from the documentation.

LeQuesne grew up in the States but has lived most of her life in the UK. She has a wide range of experience in collaborative performance. Recent performances include CRESCENDO, filmed in Icebox Project Space in Philadelphia in the summer of 2015 and Fanfare for Crossing the Road – an ongoing international project performed, to date, in London, Helsinki, Lisbon, Cardiff, New York (supported by a grant from Franklin Furnace Foundation) and, most recently, Philadelphia.  In March 2014 she exhibited “You are here – The Annual Group Photograph, 1997-2014”, at the Museum of the Photographic Archive in Lisbon.  In 2013 she staged two performances for LUPA (Lock-up Performance Art) – Encore – a re-enactment of the applause from a children’s concert in Brooklyn – in front of a row of lock-up garages in London; and News – a nice day in the park reading the paper, until things got messy. This performance was assisted by the street sweeper from the local Council and the work has since been used as a training video.

Other performances include a staged event off an icebreaker in the Arctic Circle; simultaneous films of two groups, one in Trafalgar Square, London, and one in Senate Square, Helsinki (linked up by mobile phone); events in Tate Modern and Tate Britain; a performance at Arsenal Football Grounds; and a re-enactment of a painting on the effects of drinking wine in St. Etheldreda’s, a medieval crypt in London.