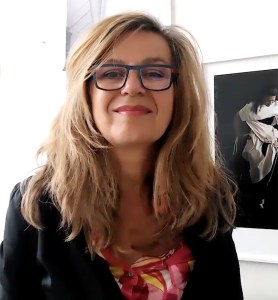 In her performances, sculptures, photographic works and video installations Margret Wibmer explores relations between bodies, objects and spaces. Using ambiguity and the principle of chance as a methodology to deconstruct internalized processes, norms and values deeply embedded within our societies, she creates transient ‘realities’ that explore new strategies for connecting us with the world and with others. This becomes particularly apparent in her participatory performances such as Relay where she uses choreographic elements, sound and textile props to engage the public as co-generators in her work. She frequently collaborates with dancers, composers and writers.

Margret Wibmer was born in Lienz, Austria. After her studies at the University of Applied Arts in Vienna, she spent a large part of the 1980s in New York where she worked as assistant for Sol Lewitt together with Kazuko Miyamoto. Since her first exhibition at Fashion Moda in the South Bronx, she has exhibited and performed internationally in venues such as Palais de Tokyo in Paris (2016, 2017), RMIT Design Hub in Melbourne (2015), Oude Kerk Amsterdam (2014, 2019), Ishikawa Nishida Kitaro Museum of Philosophy in Japan (2013); KAI 10 – Arthena Foundation in Düsseldorf (2012), Kunstpavillon Innsbruck (2006). Her works have been featured in publications such Sony Style Magazine and Vestoy, monographies have been published by Kerber Verlag (2010) and VfmK – Verlag für Moderne Kunst (2020). She has received grants from the Pollock-Krasner Foundation, Mondriaan Fonds, Prins Bernhard Cultuurfonds / Tijlfonds, Land Tirol, Austrian Federal Ministry for Arts and Culture among others. Her work is included in private and public collections in Europe and beyond. She lives in Amsterdam, The Netherlands and is currently teaching online at Nanyang Academy of Fine Arts in Singapore.

The book mentioned in the interview: Don’t cross the bridge before you get to the river Francis Alÿs, exhibition catalog with essays by Kazuhiko Yoshizaki and Yukie Kamiya

“Your strength is just an accident arising from the weakness of others.” -Joseph Conrad, Heart of Darkness There are no two people in this world exactly the same. Each of us journeys along an individual path, experiencing the world from … END_OF_DOCUMENT_TOKEN_TO_BE_REPLACED

As summer begins to set its waning course, the time is right to plan for the next quarter. If you’re a career artist, that could mean approaching galleries, creating new work, working to secure funding or applying to residency periods to enrich … END_OF_DOCUMENT_TOKEN_TO_BE_REPLACED

Mandy Morrison, Ridgewood, Queens, NY 2021 Mandy Morrison’s process explores how the body projects itself in varying contexts.  Her  particular  focus is on physicality; its expression, and how it’s capacity for agency and mobilization is affected by … END_OF_DOCUMENT_TOKEN_TO_BE_REPLACED

Alias Trate is a London-based outsider artist, working under a pseudonym that refers to the human traits he paints. He employs a haunting childlike aesthetic to chronicle stark elements of the human condition through traceable brush strokes and … END_OF_DOCUMENT_TOKEN_TO_BE_REPLACED