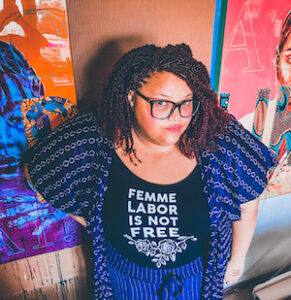 April Bey grew up in The Bahamas (New Providence) and now resides and works in Los Angeles, CA as a visual artist and art educator. Bey’s interdisciplinary artwork is an introspective and social critique of American and Bahamian culture, feminism, generational theory, social media, AfroFuturism, AfroSurrealism, post-colonialism and constructs of race within supremacist systems.

Bey’s work is in the collection of The California African American Museum, The National Art Gallery of The Bahamas, The Center for Contemporary Printmaking, Fullerton College Art Gallery, Museum of Art and History, Lancaster, CA, and more. Bey has exhibited in biennials NE7, NE8 and NE9 in The Bahamas. Bey has also exhibited internationally in Italy, Spain and Accra Ghana, West Africa. 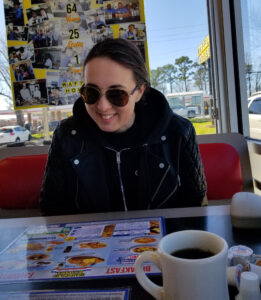 Charlotte Becket lives and works in New York City where she is an Associate Professor at Pace University.

She has been invited to lecture on her work at various galleries and universities and has been the recipient of grants from The New York Foundation for the Arts, Socrates Sculpture Park, The Joan Mitchell Foundation, The Tony Smith Foundation, the Verizon Foundation, and the Center for Book Arts.  Her work has been reviewed in The New York Times, TimeOut London, ArtForum, and Art in America, among others, and included in the publication, 100 Artists, a compendium of interviews with 100 international contemporary artists by Francesca Gavin. 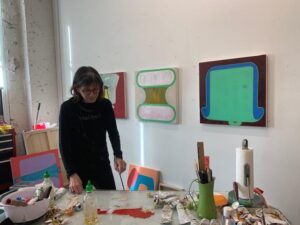 Fran Shalom has exhibited widely throughout the United States, including   the Fogg Art Museum in Cambridge Mass, and the Newark Museum. Her work is included in the collections of the Metropolitan Museum of Art, the Brooklyn Museum, the Rose Art Museum and the Biblioteque Nationale in Paris.

She has been the recipient of a Pollack Krasner Arist Grant, a MacDowell Colony Fellowship and an Art Omi Residency. She is represented by the Kathryn Markel Gallery in New York City.

The book mentioned in the interview is A Shoe Story by Lesley Chamberlain. 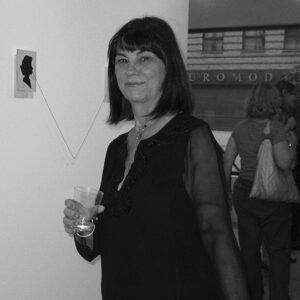 Judith Page was born in Lexington, Kentucky, and studied art at the University of Kentucky and Transylvania University. Early influences were her father, an amateur historian, photographer, and raconteur, who instilled in her a love and respect for history and the creative process, and writers such as Flannery O’Connor and Carson McCullers who provided her with many potent visual images. Other early influences include the Roman historian Tacitus and the politician Cassius Clay. Page says that her “art emerges from a Gothic sensibility, a place where horror and beauty exist in close proximity, where innocence encounters depravity, where the spirit is consumed and revived from moment to moment.”

Known for her inventive use of materials and stimulating social commentary, Page’s numerous exhibitions and installation projects were written about in Art Papers, Sculpture, The New York Times, Art on Paper, and Art in America. Page’s art is represented in numerous public collections including Vanderbilt University; FSU Museum of Fine Arts, Tallahassee; University of KY Art Museum; Mint Museum of Art; University of TN; University of Iowa Museum of Art; and Orlando Museum of Art, FL. She was on the General Fine Arts faculty of MICA from 2004-2011 and on the faculty of the MFA Fine Arts program at SVA from 2010-2016. Her website is www.judithpage.com.

Kristin Marting is a director of hybrid work based in NYC. Over the last 25 years, she has constructed 29 stage works, including 9 original hybrid works, 6 opera-theatre and music-theatre works, 9 reimaginings of novels and short stories and 5 classic plays. She works in a collaborative, process-driven way to fuse different disciplines into a cohesive whole. She has developed a unique directorial form that features a “gestural vocabulary” used both as an emotional signifier and as a choreographic element.

Kristin was recently named a nytheatre.com Person of the Decade for outstanding contribution, a Woman to Watch by ArtTable and honored with a BAX10 Award. Selected grants include 2 MAP Fund, NEA, NYSCA, Greenwall, Harkness, Jerome and Santvoord Foundations. Prior works have been reviewed in all major NY papers.

Kristin is a political activist who has organized many art actions and a frequent panelist for the NEA, TCG, NYSCA, DCA, and ART/NY. She has taught Creative Producing and Directing as well as lecturing at a number of universities. She served as Co-President of the League of Professional Theatre Women. She assisted Robert Wilson on Salome and Hamletmachine and co-founded the tiny mythic theatre company. She graduated from NYU’s Tisch School of the Arts with honors in 1988.

Kristin is co-founder and Artistic Director of NYC’s HERE Art Center, where she directs projects, cultivates artists and programs two performance spaces for an annual audience of 30,000. She also co-founded and is Co-Artistic Director of the annual Prototype opera-theatre festival.