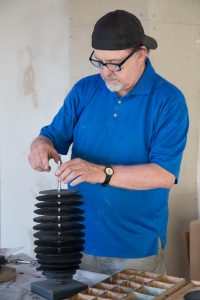 Richard Miller, cultural gadfly, poet, publisher and soon to be designer sculptor, escaped from England and settled in NYC. He was part of the late ‘70s NYC downtown art world. It was a charged environment that expanded the parameters of art making.  He was also a founding member of Colaborative Projects. The quirky-themed shows were not curated and took place in venues outside of galleries and museums. He participated in many Colab shows including the Times Square Show for he created the infamous sculpture “Man Killed by Air Conditioning”.. He and his wife, Terise Slotkin, produced Spanner NYC, a magazine of art.  The then unknown artists were encouraged to use the print medium as a creative resource.

Rejecting the art world party line of the 80’s he relocated to rural Pennsylvania when he makes objects that are inspired by functional consumer products.