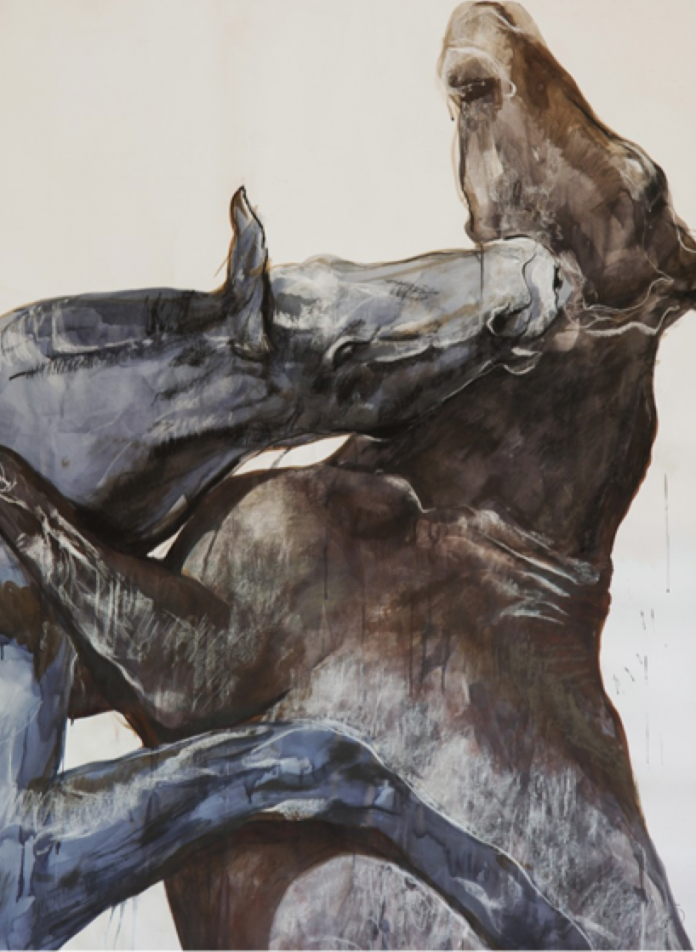 Born in Pau, a town in southern France, Reyna is a visual artist, who has lived in Toulouse for many years.

Reyna’s work gives breath to the art world, with a sensibility at once contemporary and ancient, reminding us of the importance of human touch in art and life. With her origins in the south of France, she has lived and created in this region where wild horses still graze freely and also, where, just a few hours away, the great cave drawings of animals of Lascaux hold their secrets embedded in the body of the Earth as an eternal inspiration in human history. For Reyna, the land embraces the elements as a corporal being; textures of rock, soil, and sediment, become the sand of the beaches she visits, where she uncovers our final state of being as earthen rocks in the landscape, after which, inevitably, the natural progression of humanity is to return oneself to the sea. Here, by the shoreline, she ritualizes her drawing process, a performance with pigments in the sand. The water, the minerals, and the skin of the body become one spirit of essential qualities, embodied in this world through Reyna, as she performs each drawing, her mind and body a conduit in a contemporary shamanism. Her images, faces and bodies, the sand their skin, evolve and disappear with the water’s caress, a touch of gentle effacement, as if to wipe away the dust and grime of years of distress. Her ongoing series of work, Primeval Matrix, requires her whole body to move as a ritual; as a dance, her gesture is determined, a stretched arm and hand, controls the lines she carves, while at the same time, she delicately embellishes these etched faces and bodies with natural powdered pigments. Her action as a gentle saltpetering, a vibrant means to create one last image, before they disappear forever as minerals swallowed by the sea, their tones ochre, burnt sienna, umber, and white. Her art is as a Dervish ‘whirling’ as her body conveys a silent lightning strike, drawing energy into the sand from somewhere above. This gesture of creation is both a funeral and a celebration, as the minerals are restored to their origins. These minerals are life forms in a final state of being as rocks, destined to be renewed, in the womb of all life: the sea.

Reyna found solidarity in the writings of the American environmentalist, Paul Shephard, who wrote about humanity’s constant desire to return to nature as a necessity, and about the role of animals in the development of our human conscience and reflective thought. Her recent work focuses on the iconography of the horse, a recurring image in her conscious and unconscious thought, filtering its way to the surface in the new series, Wild Coat, as large scale drawings, paintings, and videos. These works come together as installations with a tremendous energy of movement and grace; the horses are nearly deified in their presentation. These are not domesticated horses, but wild spirits, as the mustangs of the American wild west, their movements a testament to their weightlessness, unencumbered by the frailties of human error, they spring up onto two back hooves with all the grace of the Andalusian horses at the Royal Andalusian School of Equestrian Art in Spain. One senses how they once flew across the ceilings of Rococo style churches or sprung into action as the horses that draw the chariot at the tomb of the Emperor Hadrian and now they travel through time to these contemporary renderings; their restless spirits limitless and free to pass through walls and edifices. An ancient wisdom flows from the dark pools of their eyes, a primal knowledge translated through the gaze of each of these horses.

Spending time with the wild horses of her region to film and photograph them, Reyna draws a closeness to their spirits and their essential being, Reyna states, “The rapport with an animal is for me very sensual. There is a realization of all of our senses at once, of a profound existence conveyed through non-verbal means.” Wild Coat, was exhibited in a solo exhibition in the City Hall of Alquézar, Spain in 2016 and her series, Primeval Matrix, was exhibited in the Mediterranean Biennale of Contemporary Art of Oran, Algeria in 2017.