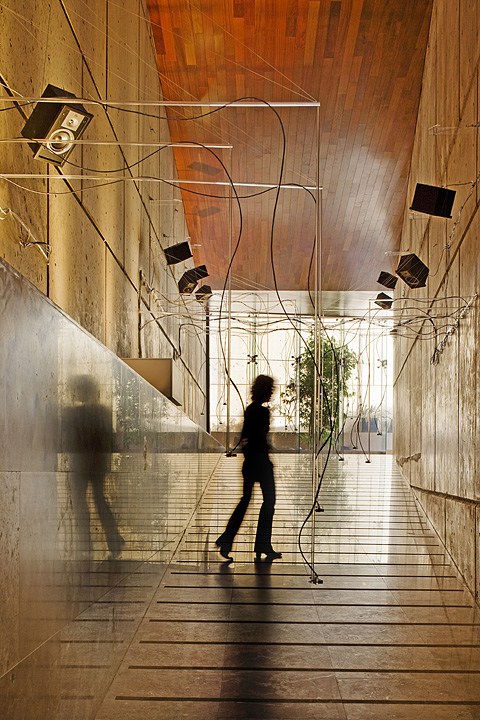 As a former dancer turned new media artist, Nina Waisman is fascinated by the critical roles that movement and sensation play in forming thought: “the very structure of reason itself comes from the details of our embodiment. The same neural and cognitive mechanisms that allow us to perceive and move around also create our conceptual systems and modes of reason… “ (George Lakoff and Mark Hansen, Philosophy in the Flesh)

Waisman’s interactive sound installations, performances and videos pose questions about such embodied thinking, while focusing on related issues including machine-human feedback loops, “invisible” labor, border-crossing, nanobiotechnology and the extended body. Her work asks experientially: What kinds of intellectual and social programming are built into our culturally entrained gestures and perceptions, and how might we hack that training, using our bodies to open our minds?

Over 2015, with the generous support and brilliant minds offered by the SETI Institute Artist-in-Residence Program and Montalvo Arts Center, Waisman pointed her research towards considering how humans might perceive intelligence from non-anthropocentric perspectives, aided by discoveries in embodied thinking. She ended the year by gathering top NASA and SETI scientists together with artists, dancers, and other researchers in intelligence, for a 2-week collaborative think tank. Attendees engaged in dialogues –  intellectual and/or bodily – with particular attention to exploring possible relationships between the behaviors and communications among single celled microbes, and the so-called “higher” human logics built upon those very same cellular behaviors.

Why study behaviors of single-celled microbes when researching intelligence? All earthly lifeforms evolved from microbes; perception and communication in contemporary plants and animals are built upon a scaffolding of perception, communication and  movement capacities given to us by microbes. Looking more deeply at microbial behaviors may locate patterns of connectedness between human behaviors and those of creatures we thought ourselves superior to. And surely there are a few things we can learn from entities that, unlike us, have survived through global dialogue over 3.5 billion years? Additionally, almost as many microbial cells are found in our guts as there are human cells in our entire body. These gut bacteria are in intimate contact with our “second” brain – the 100 million gut-located neurons that deeply impact our moods and intelligences by controlling the other brain in our head. Who is really running the show that you think is you?

With a generous commission from The 18th Street Arts Center, Waisman has begun the Laboratory for Embodied Intelligences (LEI) to dig deeper into this work with a range of intellectual, aesthetic and bodily-sited experiments framed collaboratively with artists immersed in the practices of physical thinking. LEI experiments will take place in research centers and laboratories as well as through public participatory workshops, urban interventions, performance, panels and other forms. LEI will collaborate with diverse community partners in Santa Monica to explore how humans might bodily re-situate non-human behaviors in order to perceive them viscerally, gaining knowledge unavailable through classic data analysis. LEI is excited  – aesthetically, sensorially, practically,  politically – to approach intelligence with a less cerebrocentric view, considering intelligences in entities with different bodies and sensory apparatus, living in different time scales and environments than we require.

And, since astrobiologists agree that most life we will find off of earth will be microbial, why not dig into possible intelligence in our earthly microbes to get a better feel for what and how those lovely ET’s might communicate to us?

Waisman has exhibited in museums, galleries and public spaces internationally; venues include the California Biennial at OCMA, the Museum of Image and Sound in Sao Paulo, Brazil, the CECUT in Tijuana, the House of World Cultures in Berlin, LAXART in Los Angeles, the Zero1 Biennial, ISEA, the San Diego Museum of Art, the Beall Center for Art & Technology. Selected works can be seen here.