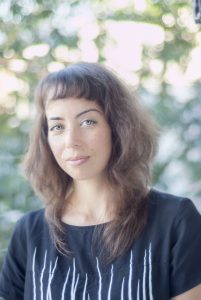 Nat Muller is an independent curator and critic based in Amsterdam. Her main interests include: the intersections of aesthetics, media and politics; media art and contemporary art in and from the Middle East. She is a regular contributor to Springerin, MetropolisM. Her writing has been published amongst others in Bidoun, ArtAsiaPacific, Art Papers, Hyperallergic, Canvas, X-tra, The Majalla, Art Margins and Harper’s Bazaar Arabia.

She has also written numerous catalogue and monographic essays on artists from the Middle East. With Alessandro Ludovico she edited the Mag.net Reader2: Between Paper and Pixel (2007), and Mag.net Reader3: Processual Publishing, Actual Gestures (2009), based on a series of debates organized at Documenta XII.

She has taught at universities and academies in The Netherlands and the Middle East, and has curated video and film screenings for projects and festivals internationally, including for Rotterdam’s International Film Festival, Norwegian Short Film Festival and Video D.U.M.B.O. She is a member of the Fund for Creative Industries and e-Culture’s advisory committee (NL) as well as Amsterdam’s municipal committee for artist studios.

Previously she served as a member of selection committee of the Mondriaan Fund (NL). In 2015 and 2016 Nat served as the Outreach Coordinator for the Prince Claus Fund.

Recent projects include Spectral Imprints for the Abraaj Group Art Prize in Dubai (2012), Adel Abidin’s solo exhibition I love to love… at Forum Box in Helsinki (2013), Memory Material at Akinci Gallery, Amsterdam (2014); Customs Made: Quotidian Practices & Everyday Rituals at Maraya Art Centre in Sharjah (2014); This is the Time. This is the Record of the Time at Stedelijk Museum Bureau Amsterdam & American University of Beirut Gallery (2014/15).

Nat is editorial correspondent for Ibraaz and in 2012 was a speaker on BBC World’s award-winning program The Doha Debates. In 2015 she curated a group show on contemporary Islamic miniatures Minor Heroisms for Galeri Zilberman (Istanbul) and Sadik Kwaish Alfraji’s acclaimed solo show Driven by Storms (Ali’s Boat) at Ayyam Gallery in Dubai for which she edited his first monograph, published by Schilt Publishing. In the same year she was Associate Curator for the Delfina Foundation’s Politics of Food Program (London). In 2016 she edited Nancy Atakan’s monograph Passing On published by Kehrer Verlag, and curated her solo show Sporting Chances at Pi Artworks (London). Her most recent show on the timely topic of loss of cultural heritage But Still Tomorrow Builds into My Face opened at Lawrie Shabibi Gallery during Art Dubai. She has been appointed guest curator for the A.M.Qattan 2016 Young Artist of the Year Award for Palestinian artists.