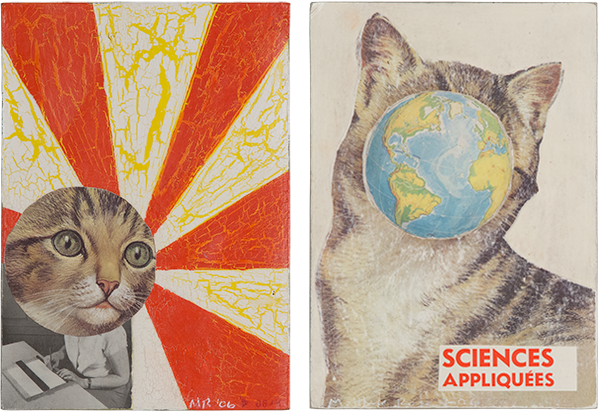 Matthew Rose, best known for his collages is a new breed of artist who might be described more as a surrealist impresario who offers dreamy tours with scissors and ideas. Rose fills exhibitions spaces with works that talk and laugh and listen in multiple  languages as he questions everything from soul and God to sex and kittens, merging literary elements with painting, photography, sculpture and collage in a seemingly endless unbound novel. Though extremely interested in Fluxus, Dada, all art forms interest him, evening knitting – his mother, Doris, produced two needlepoint text works for him – Communism and Murder.

“Most working artists today are  largely influenced by either Duchamp or Picasso — those two major arteries have flooded the veins of artists everywhere,” Rose said in an interview. “I’m interested —no, addicted — to images and image making. I’m clearly more attracted to the pop surrealists and to some extent Dada and Fluxus  ideas, writing and theater. I like the loud declarative nonsense of it and the damn-it-to-hell joie de vivre of its artists.”

Matthew Rose was born in New York in 1959. He graduated from Brown University, studying semiotics, linguistics, art, film and writing. After university, he wrote about the New York art scene principally The East Village, Fluxus, Dada and even mail art, a subject which drew him into the orbit of artist Ray Johnson in April of 1990. In 1992, Matthew moved to Paris, France where he currently lives and works.  In the last 20-odd years years Rose has exhibited throughout Europe and the United States in more than 20 solo exhibitions and dozens of group shows. His works appear in books and magazines, most recently: Cutting Edges/Gestalten and Masters of Collage/Lark Books.  Learn more on the website for Matthew Rose.