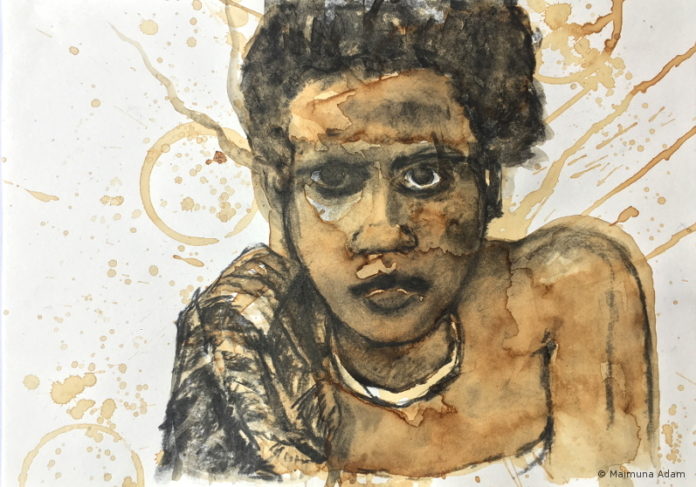 Maimuna Adam grew up in Sweden and Mozambique. She completed a Bachelor of Arts in Fine Art at the University of Pretoria, South Africa, in 2008. She creates mixed-media paintings on paper, book sculptures and video artworks using materials such as coffee, ink, banana fibre paper, charcoal, acrylic paint, canvas, found books and objects.

As an artist, she enjoys exploring notions of identity and memory, emotions related to perceived gains and losses brought by contemporary and historical migration of individuals and groups. She often makes reference to fictional as well as historical narratives, questioning the role of images and objects in relation to memory and the act of re-membering events that relate in a personal and universal way. She held her first solo exhibition “Bon Voyage” in Maputo, in 2013.

In 2014 she spent 4 months at IWALEWAHAUS at the University of Bayreuth, Germany, as a curatorial fellow through a scholarship awarded by the Alexander Rave Foundation/IFA. In 2017 she was invited to take part in the ‘180º Artists of the South’ (‘180º Artistas ao Sul’) residency at HANGAR – Centre for Artistic Research in Lisbon, with funding from Fundação Calouste Gulbenkian.

Maimuna is a member of Kulungwana Association in Maputo, where she takes part in and collaborates periodically on exhibitions and workshops. The latest project she participates in, ‘Giniceu’, opened its first exhibition in May 2019. It had the participation of creatives Carmen Maria, Djamila de Sousa, Gracinda Percina Cumbe, Lica Sebastião, Maimuna Adam, Ulica Abrantes, Suzette Honwana (Tiassu) and Wacy Zacarias, and was curated by Maria Elisa Chim.

Currently, Maimuna is working as a tutor alongside Ângela Ferreira in UPCycles 2019, a PALOP* Residency funded by FCGulbenkian and organized by ‘Associação Amigos do Museu do Cinema em Moçambique’ (AAMCM). Participating artists are Ângelo Lopes, David Aguacheiro, Eliana N’Zualo, Mariana Carrilho, Marilú Námoda, Samira Vera-Cruz and Sofia Yala Rodrigues. After a period of long-distance tutoring and individual development of video projects based on images and audio from personal and public archives, participants will meet to finalize their projects, install and present an exhibition at Nossa Senhora da Conceição fortress in Maputo, opening on 7th September 2019.