Luis Camnitzer (b.1937) is a German-born Uruguayan artist and writer who moved to New York in 1964. He was at the vanguard of 1960s Conceptualism, working primarily in printmaking, sculpture, and installations. Camnitzer’s artwork explores subjects such as social injustice, repression, and institutional critique. His humorous, biting, and often politically charged use of language as art medium has distinguished his practice for over four decades.
Since the mid 1960s, Camnitzer created a key body of work that blended both language and humor—producing a series of object-boxes that placed ordinary items within wood-framed glass boxes with text printed on brass plaques. In all cases, the printed sentences are also the works’ titles. In many ways, these boxes anticipate one of Camnitzer’s most important works, the Uruguayan Torture Series (1983–84). This photo-etching series epitomizes Camnitzer’s ability to question the social and political roles of an individual in society, while also examining a dimension of human psychology by pairing images and text to create new meaning. 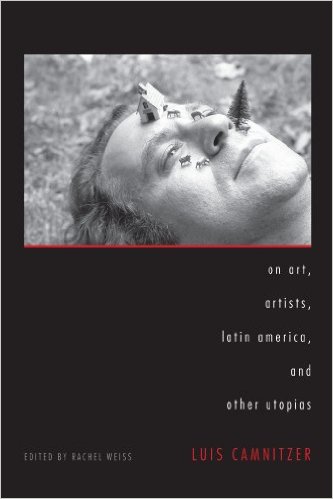 Though Camnitzer never left New York, his practice remains intrinsically connected to his homeland and the whole of Latin America. This consistent dedication cements his place as a key figure in shaping debates around ideas of post-Colonialism, Conceptualism, and pedagogy.

Read more of his articles on e-flux, An Artist, a Leader, and a Dean Were on a Boat… as well as Art and Literacy.