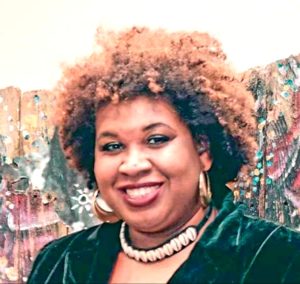 Lavett Ballard is an Artist, Art historian, Curator, and Author. I hold a dual Bachelor’s in Studio Art and Art History with a minor in Museum Studies from Rutgers University, and a MFA in Studio Art from the University of the Arts in Philadelphia.

Ballard’s art has been included in literary, film and theatre productions and museum, galleries, public, private institutions and exhibitions nationwide. Among other accolades she has been named by Black Art In America as one of the Top 10 Female Emerging Artists to Collect, and have been nominated for the inaugural Art for Social change Pew Foundation funded Residency among other distinguished honors. Her work has been included in prominent collections such as the Smithsonian, the African American Museum of Philadelphia, the T. Thomas Fortune Cultural Center, Weeksville Heritage Center, the Nixon Family and the Grant and Tamia Hill private Collections.

Ballard views her art as a re-imagined visual narrative of people of African descent. Her use of imagery reflects social issues affecting primarily Black women’s stories within a historical context. Her current body of work, uses collaged photos adorned with paint oil pastels and metallic foils .These photos are deconstructed, and layered on reclaimed large and small aged wood fences. The use of fences is a symbolic reference to how fences keep people in and out, just as racial and gender identities can do the same socially.