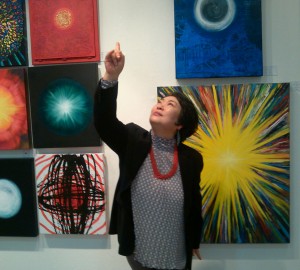 Kwon Ha Joo was born in Yeosu, Jeollanam-do, South Korea. She majored in Western paintings at Hong-ik University in Seoul which she graduated from in 1986. She established her own art institute and taught students for 10 years. She started Seokmun respiration in 2002 and is still doing it now. She has had 11 solo exhibitions and more than 200 group exhibitions. She lives in Suwon, Gyeonggi-do, South Korea.

Where are you living now and what does your studio and neighborhood look like?

I live in Suwon, Gyeonggi-do, South Korea, now. I was living in Yeosu, Jeollanam-do when you sent me the previous mail. There has been a change to my environment, which makes me move to Suwon. It has been about two months since I came here. Two months are quite a short time for me to get a studio near my house, so I do not have any studio here. I will get it in the near future.

Now I work on some small projects and try to think of various ideas at home. But, I have a studio in Yeosu and it takes 3 hours and 30 minutes to get to Yeosu by car. So I will do my job at the studio in Yeosu when I need to work on some big projects. It is located on the second floor of a commercial building in an apartment complex. There are apartment buildings and commercial buildings around the studio.

What are you working on in your studio? Please describe current work / projects and what they look like.

In these days, I make the visible and the invisible such as consciousness and unconsciousness, coincidence and inevitability, energy and mind, form each other by pouring, spraying, and shaking colours on canvas lying on floor. But what is really important in my work is that I breathe in and out deeply sitting for about 30 minutes to one hour before I start.

For me, breathing is to charge my energy. First, I sit on a chair or floor. Then I take a deep breath closing my eyes. After that, I start to breathe in and out concentrating on Seokmun in lower belly. As I do this, I relax my body and mind, refining my thoughts.

When my body is full of energy and Yeo-eui-joo is awakened, I begin my work thinking myself that I wish I will do a better job. Then I choose which colour to paint on canvas. The performer is an artist, but when colours touch the canvas, my breath, energy, and mind mix and change moving as they will. I go on to pour colours as long as I want. By pouring colours, I make colours change themselves. Human will, mind, and energy meet those of colours communicating with each other and making unexpectable images. Even the artist do not know what the results will be. Different images are made every moment I pour even the same colours, which makes me feel excited and refreshed. I am in a training called Seokmun respiration. As my training level changes, my perceptions change more and I can try new performances and images.

What was your most successful work in your opinion and why?

I like all of your questions but this one. I think it will be better to change this question to another such as, ‘What is your favorite work?’ or ‘What is your work special to visitors?’

In fact, my works represent my perception and quality when I try my best ways to express thoughts. So I think every work is successful. However, I can tell you the answer if you ask the two questions that I mentioned as examples. So I answer supposing that you asked these two questions.

This is my recent work, with canvas (73cm x 60cm) on oil. It consists of only black and white. I ‘just’ like it but I tried to think of reasons because of the interview. It has an  unexpectable force and a key for directions. I look at the picture again and again when I eye some change, as the work seems to cut both ways at the forked road. It also has a subtle power to make me not stay at a certain point and make me refreshed.

2. The work which is special to visitors

Oil on canvas (162cm x 130cm) This work changes itself from white to blue. I will send you photos of these two works (below). It is invited to the exhibition of Yeosu International Art Festival in 2012 when Yeosu International Exhibition was held in Yeosu. Iris Moon who works in New York came to Yeosu as an art director. Thanks to director’s invitation, it was displayed at Yewulmaru Gallery in Yeosu.

According to a docent and the director, it was the most popular. Even when I displayed it at another place, viewers showed various reactions and some reactions were unusual.

I think the reason is the energy inside the painting. Maybe energy and mind remind viewers of the memory when human beings existed as a certain form of light before they were born with soul and flesh combined? I think that is the reason.

What will you be doing in the near future in terms of next events?

I will go on present project to find out what effects it has on me, and think about its direction. I want to work on one canvas which shows a variety of ways in which I have expressed so far. At the same time, I want to try some performances with art, music and dance combined if I can.

Last question – what book(s) are you reading now? They could be anything at all.

The book that I read now is Seokmun Philosophy. It was published as two volumes and I am reading volume 2. I want to introduce it briefly. For it has had a lot of effects on me.

The book consists of three parts.

Part 1 explains the origin of the world we live in and describes how heaven looks like.

It also tells us why humans were created, why humans exist, and the existential value of human beings. It proposes a methodology called Seokmun respiration to make everything created by Seokmun training achieve harmony, completion, and evolution. Seokmun respiration helps trainees to learn the ultimate human identity and to reach a place where they came from in heaven. That is possible because of the respiration which secrets lie on.

Trainees usually breathe after putting a round patch on their Seokmun in the lower belly. When the breath reaches Seokmun, Danjeon is formed. When Danjeon is formed, Yeo-eui-joo in the space of Danjeon is awakened by accumulated energy inside their bodies. After clearing training levels from Wasik to Yangsin, trainees can open Seokmun and find Yeo-eui-joo. Yeo-eui-joo is a marble made of light. It cannot be seen but can be felt with the help of the respiration. This Yeo-eui-joo is a compass to help humans to find their ultimate identity.

Seokmun respiration in Seokmun Philosophy is a door that humans can knock and open and that improves the strength of light.

Seokmun respiration is a training method which makes body healthier by controlling body and mind and helps trainees face themselves in reality, truly understand themselves, and meet ultimate trainees themselves.

Part 2 describes the history of heaven, and the history is defined as following meanings.

First, history is a process of creation.

Second, history is a process of evolution.

Third, history is a process of rising, expansion, and advance.

Fourth, history is a process of changing time and space where all three happen.

In summary, history is a process in which everything in space evolves in a way suitable for its reason why it is created, rising, expanding, and developing itself.

Part 3 describes new paradigms of human history. It is about uncertainty of human in the future. It also describes what to do to prepare for harmonious universe being changed by new paradigms. It can tell you about heaven and where we come from, a mystery which anybody is curious about. I seriously recommend that you should read this book, too.