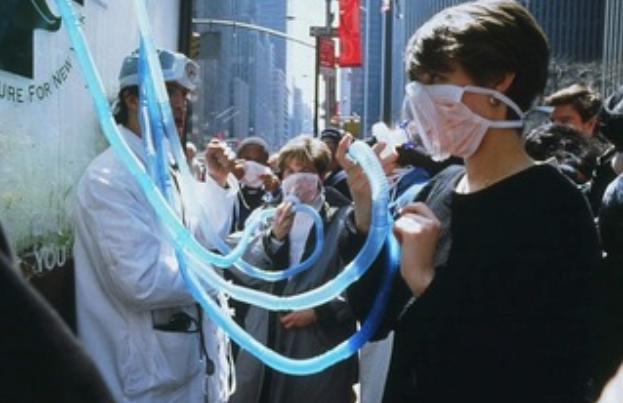 Over the past 40 years John Halpern’s art and films have approached and challenged some of the more pressing issues of our time with humor, contemplation and aesthetic “intelligence.”

Throughout his life, Halpern has created interactive public art events and films. His projects evolve through a process of deconstruction, breaking “problems” down into component parts and reassembling them in forms that undermine the logic of the perception that conceptualized them as “problems” in the first place.

In unexpected ways, this sensitizes and enables the audience/participants to experience both a measure of responsibility for a potential outcome and the freedom to find their own individual and/or collective creative voice, be it in daily life, conventional art expression or solution to a common social or environmental challenge.

The art is not intended to place judgment or to determine right from wrong. It is art that liberates us from the need for art. It’s art that shows us how our minds are working and points us to a path away from delusion.

Using art to see beyond form, to transform problem-oriented perception, to present the audience with fresh ways of seeing and behaving, Halpern has called “cultural activism.”

In the 1990s, learning about some of Halpern’s interactive events, Allan Kaprow, progenitor of the 1960s “Happening” movement, said that Halpern’s (see below NEW CONSUME) projects are like “Fluxus with responsibility.”

In 1977, Halpern co-founded Art Corporation of America Incorporated, an artists’ collaborative. Together, they launched BRIDGING (its 40th year anniversary is discussed in this on-line interview with Brainard Carey):

BRIDGING, 1977, was “Art Corp’s” creative solution to the problem of the extraordinary access and presence terrorism had in mass media at the time. BRIDGING creatively addressed the impact violence in media has on the mind and public. The serene, celebratory spectacle atop all of New York’s bridges, which became appropriated city infrastructure, captured major media attention and transformed news into art for millions of viewers worldwide. The artists, all of whom were arrested and later dismissed, technically climbed up the elegant, arched suspension cables of all the bridges to reach the summits. Traffic in and out of Manhattan was disrupted city-wide. BRIDGING won Best News of the Year Award, 1977, for ABC TV / Eyewitness News / Rose Anne Scamardella, reporting.

“BRIDGING is the first social-sculpture to use mass-media as art.” – Joseph Beuys

The collaborative nature and creative rigor intrinsic to the success of BRIDGING was not lost on Halpern. It had deep impact and resonance in his collaborative and interactive works over the following decades.

Through an introduction to Halpern through gallerist Ronald Feldman, Joseph Beuys invited Halpern to participate with the Free University in Germany. Beuys and Halpern collaborated on JOSEPH BEUYS /TRANSFORMER, 1988, a television-sculpture and film portrait of Beuys produced during Beuys’ Guggenheim, New York exhibition. TRANSFORMER is in most major contemporary art museums’ permanent collections and has been translated into seven languages.

In the late ‘80s, Halpern created NEW CONSUME and ART FOR THE 21ST CENTURY (featured at Tate Modern, 1993), engaging in 10 more years of public interactive art and media sculpture internationally. These works put the viewer in the position of artist/protagonist with the motto: “Consumers are the producers of the future.” This maxim was exemplified by works such as SMOKESCULPTURE – sending cigarette smoke back to cigarette factories with 1,000 participants; FRESH AIR – mobile, interactive breathing stations comprised of sealed glass cubicles containing high-yield, oxygen-producing plants with closed-circuit respiration equipment, enabling over 100,000 people to exchange air between plants and each other in Europe and America; and BREATHSCULPTURE – the artist lived in an hermetically sealed glass house for 10 days with 10,000 plants, breathing once per minute in Holland. NEW CONSUME won a prize from the Swiss government’s Department of Industry and Economy for “ALPS,” a large-sized art cookie in the form of a mountain that engaged out-of-work people and the public in transforming the economy when buying/eating the ALPS cookie. The motto here was “have a bite, change the economy.”

Halpern uses film as an empowering medium and tool for creative and conscious social engagement. In the mid 1990s, Halpern began exploring documentary format films, working with some of the leading spokespeople and cultural icons of our time, including the Dalai Lama, Martin Scorsese, Melissa Mathison, and Jetsunma Tenzin Palmo with films like REFUGE and WAKING BUDDHA.

To program a WAKING BUDDHA LIVE event in your venue or to donate to WAKING BUDDHA, please contact john@mdsfilms.com and visit: http://www.wakingbuddha.com/

The books mentioned in the interview that he is reading are the following: Open Heart Open Mind by Tsoknyi Rinpoche and When Things Fall Apart by Pema Chodron.