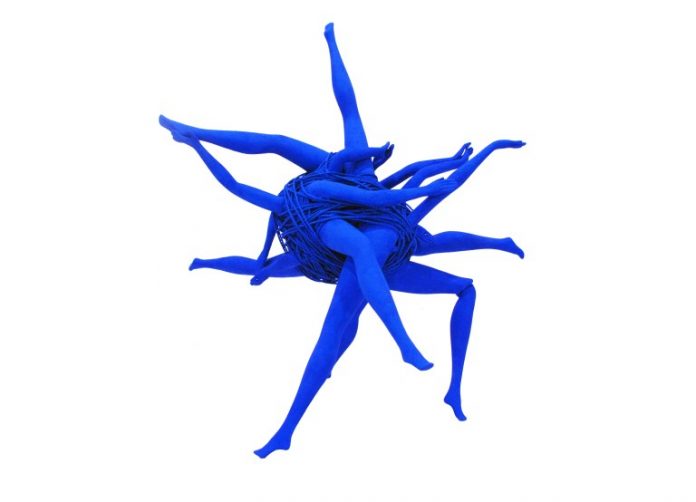 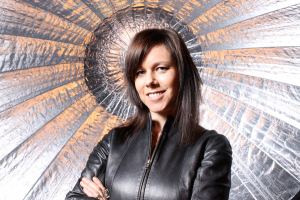 E.V. Day is a New York based installation artist and sculptor whose work explores themes of sexuality and humor while employing gravity-defying suspension techniques.

She has described her work as “futurist abstract paintings in three dimensions.” By manipulating iconic imagery from popular culture she transforms social stereotypes and playfully illuminates contradictions of gender roles by re-animating the recognizable into new forms and new meaning.

Day received her MFA in Sculpture from Yale University School of Art. The first work in her Exploding Couture series, Bombshell, was included in the 2000 Biennial of the Whitney Museum of American Art and is now in the Museum’s permanent collection. She has had numerous solo exhibitions, including the 2001 installation G-Force at The Whitney Museum at Altria, in which she suspended hundreds of thongs from the ceiling in fighter-jet formations, and a survey exhibition in 2004 at the Herbert F. Johnson Museum of Art at Cornell University. Bride Fight, a high-tension string-up of two dueling bridal gowns, was exhibited at the Lever House as part of their collection in 2006. From the Fall of 2009 to the Spring of 2010, she exhibited Divas Ascending, a 14-sculpture installation at Lincoln Center created from costumes retired from the archives of the New York City Opera-an exhibition that traveled to The Kentucky Center in 2011 and The Houston Grand Opera in 2012. Her 2013 installation SNAP! at Philip Johnson’s Glass House cast a net, capturing and staking Johnson’s playful pavilion Da Monsta to the ground and taming the beast through a sound sculpture inside entitled Purring Chamber.