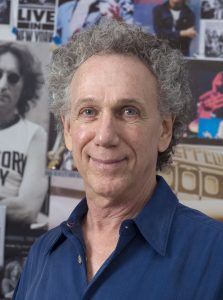 Bob Gruen is one of the most well-known and respected photographers in rock and roll. From John Lennon to Johnny Rotten; Muddy Waters to the Rolling Stones; Elvis to Madonna; Bob Dylan to Bob Marley; Tina Turner to Debbie Harry, he has captured the music scene for over forty years in photographs that have gained worldwide recognition.

Shortly after John Lennon moved to New York in 1971, Bob became John and Yoko’s personal photographer and friend, making photos of their working life as well as private moments. In 1974 he created the iconic images of John Lennon wearing a New York City t-shirt and, standing in front of the Statue of Liberty making the peace sign – two of the most popular of Lennon’s images.

Bob has worked with major rock acts such as Led Zeppelin, The Who, David Bowie, Tina Turner, Elton John, Aerosmith, Kiss & Alice Cooper. He toured extensively with the emerging punk and new wave bands including the New York Dolls, Sex Pistols, Clash, Ramones, Patti Smith Group and Blondie. His “Sid Vicious with Hot Dog” photo was acquired in 1999 by The National Portrait Gallery, London, for their permanent collection. In June 2004 Bob was presented with MOJO Magazine’s prestigious Honours List Award for Classic Image in London. “All Dolled Up,” a DVD documentary made by Bob Gruen and Nadya Beck of their early ‘70s video footage of the New York Dolls, was released in 2005.

In the spring of 2007 FAAP University in Sao Paulo, Brazil presented an exhibition of Bob Gruen’s work. Titled ROCKERS, the exhibition attracted 40,000 visitors. The ROCKERS exhibition was also shown from April to July 2008 at Morrison Hotel Gallery on the Bowery in New York City. In November 2010 Bob was inducted into the Long Island Music Hall of Fame. For his many charitable contributions, Bob received the first ever John Lennon Real Love Award in December 2014 at the 32nd Annual John Lennon Tribute Concert.