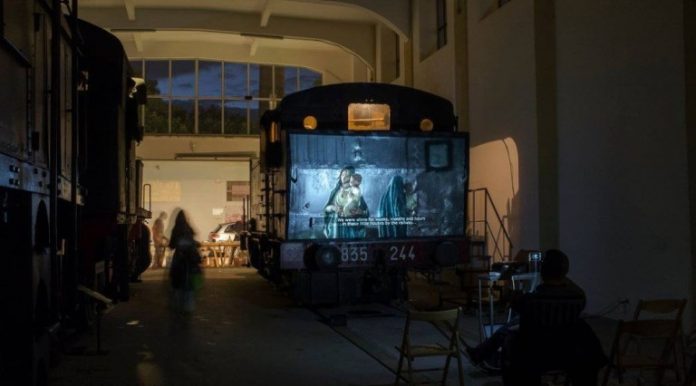 Her latest, and most major project to date, ‘Treatment for Six Characters’, is based on an unrealized film Italian writer Luigi Pirandello’s wished to make about a fictionalized, ethically ambivalent, portrayal of the creative process leading to his seminal 1921 play ‘Six Characters in Search of an Author’ – using a text found in a drawer in Vienna about 25 years ago she adapted Pirandello’s plans making a film that explores the imaginative possibilities of his absent film. This work was made during an award at the British School at Rome and has recently had private screenings at The Drawing Room Gallery/ Tannery Arts (London), and Italian Cultural Institute London, (2014/15). More recently she has recently made “The Passing of the Keepers of Salento” (2015) with organizations Progetto GAP and PepeNero Italy as part of the “Moving Landscape project” documenting and dramatizing a filmed declaration with the the train Keepers of Puglia about the moment their role fell into obsolescence in 2014, as well as “Dear Anne-Marie…” (2015, forthcoming), a staged scenario in which a fictional character invades public events, both of which are included in the forthcoming publication “Moving Landscape”, published by Progetto GAP (Italy, 2015).

She has recently been commissioned by the Borough Road Gallery, London, to make a work about the Vorticist painter David Bomberg and his students for exhibition in 2017, and is developing a project that takes the bedchamber of Eliza Soane, within the Sir John Soane Musem London, as its subject. The room, now lost, was preserved for nearly twenty years after her death in 1815.

Her work is regularly exhibited internationally at galleries and museums such as: Sogn og Fjordane Kunstmuseum (Norway), Palm Springs Art Museum , Kunstvereniging Diepenheim (The Netherlands), The Sir John Soane’s Museum (London), Apex Art (New York) Draiocht Arts Center (Dublin), Sagacho bis (Tokyo), Galerie der Künstler (Munich), Royal College of Art London and Spacex Gallery (Exeter). Publications that feature her work include The Drawing Book, edited by Tania Kovats (Black Dog Publishing, 2006). She received the Derek Hill Scholarship in Drawing at British School at Rome, 2012, and an International-artist-in-residence-award, Center for Contemporary Art, Prague. Anne-Marie was one of a number of a group of artists responsible for the London based artist-run Cubitt Gallery in the 1990‘s. She still occasionally curates exhibitions & projects, most recently in Norway, with Lars Sture & Kjetil Berge for the Sogn og Fjordane Kunstmuseum, Norway. She was educated at Middlesex University & the Royal College of Art and lives in London, where she is a Lecturer on the MFA course at Wimbledon College of Art, University of the Arts, London.