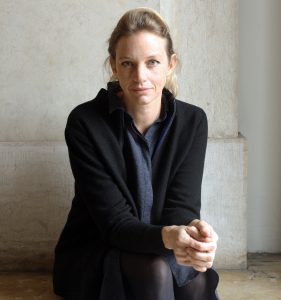 Annabelle Moreau is a French Italian artist who grew up in many different countries until she settled in London for her studies. She completed a BA in painting at the City and Guilds of London Art schools followed by a Postgraduate diploma in Modern Philosophy in Literature and Art at Goldsmith College and a Postgraduate Diploma in fine art at the Royal Academy of Arts.

She graduated in 2004. Her practice is concerned with the notion of space, time and perception. Large installations of monumental paintings and sculpture become the mean by which the artist explores the consumption and apprehension of space. Copper, brass, aluminum are the main support for her work.

The latest work consists of installations, combing painting, sculpture and sound. The work explores through the representation of light, space, time and the auditory the interrelationships all of the senses. Sounds are added to static images inducing the perceiver to wonder in the imaginary space that is depicted. Movement of the inert object is enhanced on large-scale aluminum environments as light is caught in the grain of it s surface animating the space the viewer enters. The choice of material and mundane objects and their identity within the context in which they are presented plays a major role. Whether support or artwork, their ambivalent nature investigates the ideas of importance and fragility and the reduction towards essence and absence.

Moreau has been awarded the Grant for Visual Arts by the Caloulste Gulbenkian Foundation in 2016.

Her work has been reviewed in Time Out, Art Forum, Contemporary Magazine, Diário das Noticias, Art Magazine and interviewed for the Portuguese art program RTP3 as Horas Extraordinarias.

She has been recently offered to present a solo show in 2018 in the Museum of Natural History and Science in Lisbon.

The books mentioned in the interview are  Sputnik Sweetheart by Haruki Murakame and  Iran awakening by Shirin Ebadi.