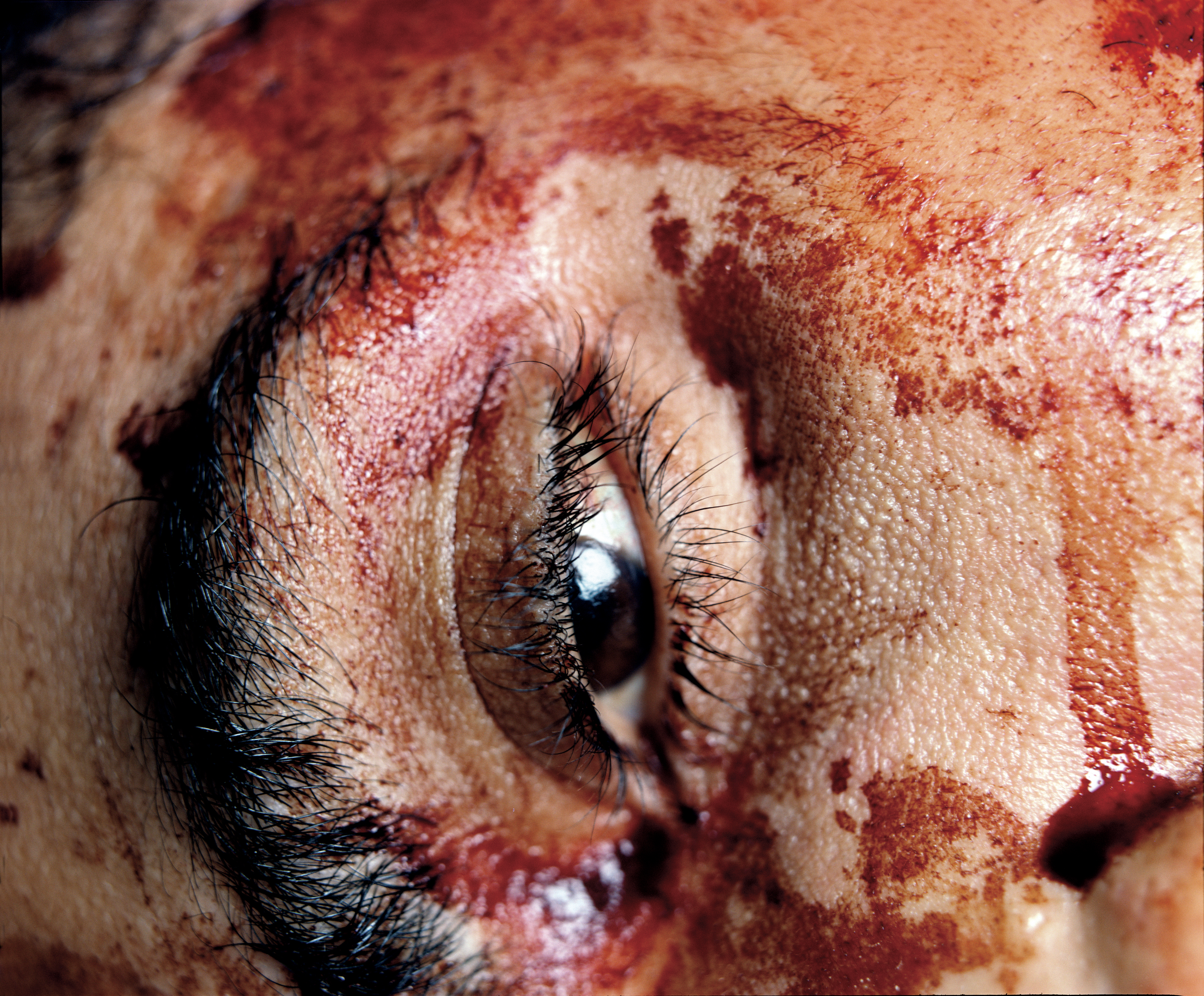 Andres Serrano was born and raised in New York City.

Influenced by the pre-war European art movements of Surrealism and Dada, the first images Serrano created (back in 1983) were tableaux incorporating religious iconography, dead animals, raw meat and human subjects, amongst other elements. More than any other, blood was the constant element tying these images together. A symbol for passion and violence, it became the ideal vehicle to convey Serrano’s preoccupation with the sacrificial dramas of spiritual, political and sexual practices, and the ecstatic links between them. References to great artists from Rembrandt to Mondrian, and to various cultural forms of memento mori, were also persistent themes that would recur throughout Serrano’s oeuvre.

Subsequently, Serrano decided to use blood not just as content, but as form, resulting in images that were more reductive and abstract than his earlier works. Along with blood, the artist began using urine, milk, and later semen, as the raw materials for his work, producing two overlapping series – Body Fluids and Immersions from 1986-90 – which were to prove far more provocative than he ever intended. In a 1989 congressional session, New York State Senator Alfonse D’Amato tore up a reproduction of one of the images from Immersions – the now infamous photograph of a crucifix submerged in urine, titled Piss Christ.

The action sparked a public debate over the National Endowment for the Arts’ funding of ‘obscene’ art, and for better or worse the ensuing notoriety catapulted Serrano to worldwide fame. In fact, Serrano conceived many of the images from both series as monochromatic studies in light and color value. For example, the first photograph in the series, Milk / Blood, 1986, explicitly referenced the geometric abstraction of Dutch artist Piet Mondrian.

After the media furore over Piss Christ, Serrano turned to the genre of portraiture, creating several thematic bodies of work, each depicting various social groups. The first of these was Nomads, 1990, a series of pictures of homeless individuals whom Serrano found on the streets and, in several cases, photographed inside his studio. The sense of dignity captured in these portraits together with their obvious orchestration came to signify a style Serrano would refine in later works such as his Budapest, 1994, and the opulent images of A History of Sex, 1997.

In other works, portraits of Ku Klux Klan members photographed in their own milieu (‘Klan Series’, 1990) and dead bodies mutilated or in the process of decay (‘Morgue’, 1992) confront viewers with more discomforting images of violence and death. Still, even these retain a certain seductive quality. Drawing from the lexicon of advertising, fashion and even pornography, Serrano’s large-format, highly saturated photographs aestheticize their subject matter, even when this is abject in nature. Like the images produced by his peers Cindy Sherman and Robert Mapplethorpe, Serrano’s works often take on an iconic status, and are some of the most arresting images in contemporary photography.