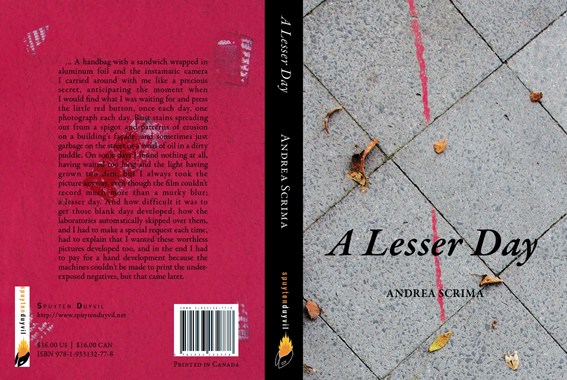 Andrea Scrima was born in New York City and studied fine arts at the School of Visual Arts in New York and the Hochschule der Künste, Berlin, Germany, where she lives and works as a writer and translator. Scrima’s first book, A Lesser Day, was published in 2010 by Spuyten Duyvil Press, Brooklyn, New York; a German edition will be published by Droschl Verlag in 2018. Excerpts from an ongoing blog titled all about love, nearly are included in Wreckage of Reason II (Spuyten Duyvil, 2014) and the forthcoming anthology Strange Attractors (edited by Edie Meidav). Scrima is currently completing a second novel, titled Like Lips, Like Skins. An earlier version of this novel was awarded Second Prize in the Glimmer Train Fall 2010 Fiction Open. 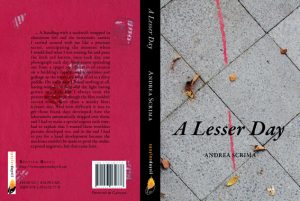 Scrima was the recipient of a literature fellowship from the Berlin Council on Science, Research, and the Arts in Berlin, Germany (Senatsverwaltung für Wissenschaft, Forschung und Kultur, 2004) and won a 2007 National Hackney Literary Award for Sisters, a short story from an ongoing collection. In the spring of 2011 she took part in a writing fellowship at the Ledig House / Art Omi residency program in Ghent, New York. Her literary criticism appears regularly in The Brooklyn Rail, Music & Literature, and The Quarterly Conversation (recent essays on: Lydia Davis, The Collected Stories; László Krasznahorkai, Seiobo There Below; Robert Walser, The Walk). She has been senior editor of the online arts journal Hyperion: On the Future of Aesthetics.

Prior to her decision to focus on literature, Scrima worked as a professional artist for many years, incorporating short fiction pieces into large-scale text installations. She has received numerous awards for her artistic work, including a grant from the Pollock-Krasner Foundation (1989/1990) and the Lingen Art Prize (Kunstverein Lingen, Germany; 1996) and has been represented in exhibitions at Franklin Furnace in New York, the Contemporary Art Center in Moscow, Kunst Haus in Dresden, the Museum für Neue Kunst in Freiburg, the Neuer Berliner Kunstverein, and many other institutions and commercial galleries internationally.

An excerpt from A Lesser Day can be read on Scrima’s website, and an in-depth interview on the book was featured in The Brooklyn Rail.  The excerpt below, taken from Scrima’s new novel, Like Lips, Like Skins, is a description of the artistic process and ties in to the interview. Scrima is currently reading Ann Quin’s Passages; Nathalie Sarraute’s Childhood; and Violette Leduc’s La Batarde.

Making art was a form of archaeology, of excavating the inscrutable. It revealed itself through fragments, through their reconstruction. Why this dot, this smear—why did they resonate in such an unmistakable way? It was essential to recognize these events, to understand the patterns of their repetition and to narrow them down to a visual vocabulary. These were the elements at our disposal, there were never more than a handful of them, and they remained irreducible. Process was everything: there had to be a truthfulness to it, a conjunction between the act and the impulse that had propelled it, an economy in which every mark stood for something—not as a means to an end, but at the very moment it was being made. It required a suspension of conscious will; it was about locating one’s inner sensorium and learning to pay attention to it, to trust it. It was the point of convergence between the self and the world: the place where, if only for an instant, a universal language might be revealed. I stepped back to view the large canvas. Subtle shadows were visible across the white expanse now, caused by the topography of the scraped surface beneath it. Swirls of pigment had come to rest in the turpentine on the floor, and as I bent down to spread a few sheets of newspaper over the turbid puddle, my reflection bent down with me and reached its fingertips up toward my outstretched hand.