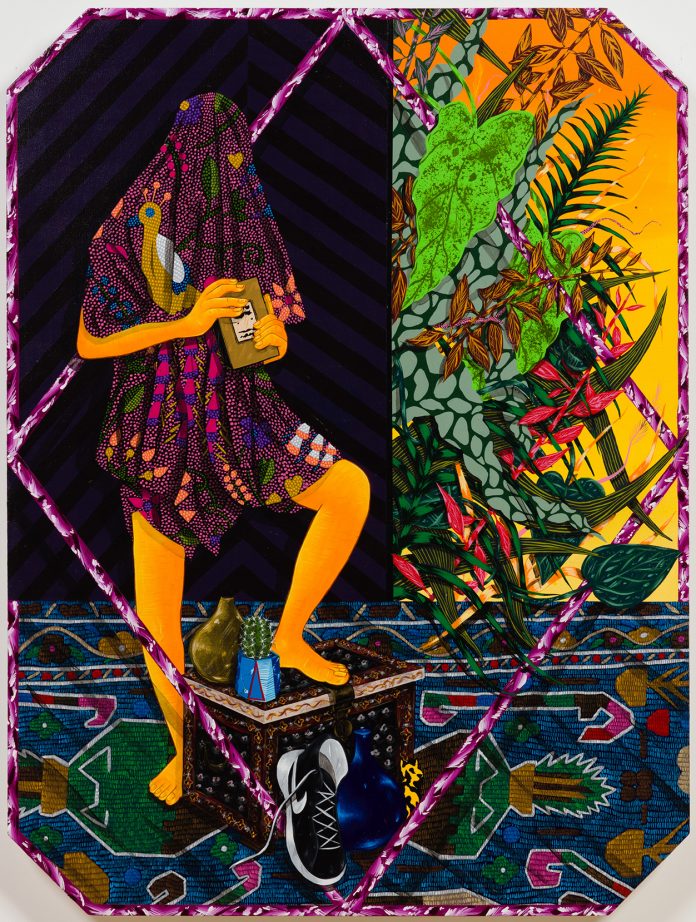 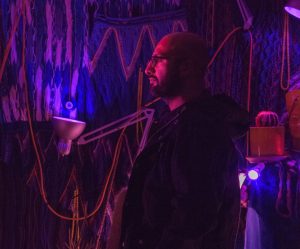 In his work across media, Amir H. Fallah interrogates systems of portraiture and representation embedded in the history of Western art. Fallah’s ornate environments combine visual vocabularies of painting and collage with elements of installation and sound to deconstruct modes of identity formation. Portraits of the artist’s veiled subjects employ ambiguity to skillfully weave fact and fiction like the textiles that cover them. While the stories that surround his muses are deeply personal, as told through the intimate possessions the subjects are encompassed by, they universalize generational experiences of movement, trauma, and celebration. With their Pop Art hues and investment in domestic life, Fallah’s paintings wryly incorporate contemporary American tropes into paintings more formally rooted in Islamic Art, including the organization and arabesque embellishment of Persian miniatures. In doing so, his work possesses a hybridity that reflects his own background as an Iranian- American immigrant straddling cultures.

Amir H. Fallah (b. 1979, Tehran) received his BFA in Fine Art & Painting at the Maryland Institute College of Art in 2001 and his MFA in Painting at the University of California, Los Angeles in 2005. He has exhibited extensively in solo and group exhibitions across the United States and abroad, including solo presentations at the Schneider Museum, Ashland (2017); the San Diego Art Institute (2017); the Nerman Museum of Contemporary Art, Overland (2015); and The Third Line, Dubai (2017, 2013, 2009, 2007, 2005). In 2017, Fallah received the CCF Grant, and in 2015, the Joan Mitchell Foundation Painters and Sculptors Grant. The artist was chosen to participate in the 9th Sharjah Biennial. Fallah lives and work in Los Angeles.