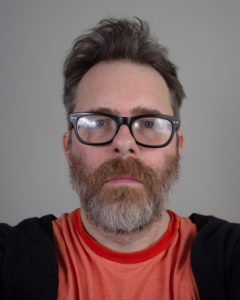 Scott Dolan started making Slight Headache comics in Iowa City in the summer of 1992 as a combination diaristic notetaking/money-making scheme. The small zines were quickly filled with images and text with the thought that any idea can be a seed for another idea, none too big, none too small. The original comics were sold at a few stores in town and traded widely through the mail with mail artists, zinesters and other collaborators and supporters. The comics were non-linear in layout, more a collection of briefly observed moments than a sequential story. Mostly, the images were light-hearted commentary on the events of the day, with special interest taken in language, customer service, alienation,  food, poetry, punk rock, loss, the ridiculous possibilities of being, and any other of the Big Ideas in art, such as may have arisen.

In 2016, working with Circadian Press in Brooklyn, he released a “completely remastered” limited edition Slight Headache box set, a few sets of which are still available on his website.

Alongside the comics grew a series of gouache and watercolor pictures, the “Kutch and Mancuso Drawings,” which were loosely based on his own life experiences and stories heard from, and about, friends.
Currently he has been working on a series of pencil portraits, gouache paintings of an unknown (to him) deceased artist’s pencils, and other tools of the trade, which were given to him by a friend of a friend.

He was born in Minnesota, received his MFA from the University of Iowa and currently he lives, works and otherwise lingers in various parts of Brooklyn. He was a founding member of the legendary Speedboat Gallery in St. Paul, Minnesota. His work has been shown at Happy Lucky #1, Cellar Gallery, NYSG and Five Myles in New York City; Speedboat Gallery, CO Exhibitions and No Name Gallery in Minneapolis/St Paul; Lovey Town in Madison Wisconsin, and others. His work is in the permanent collections of the U.S. Library of Congress’s Monographs Section, the University of Iowa Special Collections, the University of Maryland, the University of Vermont, The Walker Art Center,  Carleton College, and the Franklin Furnace archives, among others.

The book mentioned in the interview is Greek to Me, by Mary Norris.