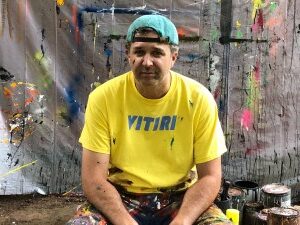 Rob Ober (b. 1968, Wiesbaden, West Germany) lives and works in Kent, CT. Having grown up as the son of a US diplomat, Rob spent his youth in Moscow, Dehli, Athens and Bethesda, MD. After college, Rob began collecting Russian nonconformist art.

In 2006, Rob opened a gallery in Kent, CT and showed the works of many of his artist friends including Brian Belott, Katherine Bradford, Lance De Los Reyes, and Rob Nava. Rob began painting seriously seven years ago. Art Miami  2021 is the first exhibition of his work.