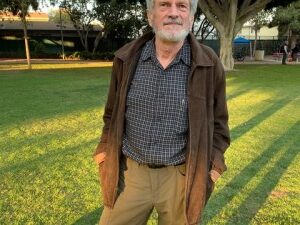 Michael McClard arrived in New York in 1973 with a BFA from the San Francisco Art Institute, where he also won a Peabody Award in Sculpture. He soon made his mark on the art scene as a member of a highly original group of young artists who helped to revive an interest in painting and visual performance. He was a founding member of the noted artists’ support  group Colab and its first chairman.

Sidestepping the confines  of abstract conceptual art,  McClard’s work seethes with figurative content; yet it has nevertheless retained a conceptual element and mines a strong vein of humor. During the 70s he staged provocative  performances such as « Foes v. Foes » at the Kitchen and  surreal, carnivalesque installations at venues such as the Clocktower (« There’s Meat on these Bones ») ; PS 1, Institute for Art and Urban Resources,  De Appel, Amersterdam and N.A.M.E Gallery, Chicago. For these presentations, he constructed all sets and props and performed, often as sole actor. His one-act play, « Mumbo Jumbo, » was published in Avalanche 12, Winter 1975.

In October 1981, his first large-scale one-man show of paintings and frescoes took place at Mary Boone, occupying both galleries on either side of West Broadway. Drawing on sources from  mythology, history and  everyday life, he created a pantheon of imaginary characters, notable for their tactile raw energy, range of facial expressiveness and astute power of observation. Also featured were  inventive depictions of historical scenes,  acclaimed by critics such as Grace Glueck of the New York Times for their verve and by Hal Foster of Art in America for their metaphysical insights. Many of these works were acquired by New York and Los Angeles public and private collectors. During this period  McClard was also awarded two fellowships by the National Endowment for the Arts, in Visual Arts and Mixed Media.

In the 90s McClard took a temporary hiatus from painting to explore new media. He embraced the digital revolution and applied his draughtsmanship skills to the creation of original software with his brother Peter McClard through their dotcom enterprise, Hologramophone Research.  The computer installation «Characters» furthered his interest in human physiognomy by generating an unlimited sequence of drawings of faces and was exhibited in « A visage découvert, » Fondation Cartier pour l’Art Contemporain, Jouy-en Josas, France.

The book mentioned in the interview: Leavings: Memoir of a 1920s Hollywood Love Child.