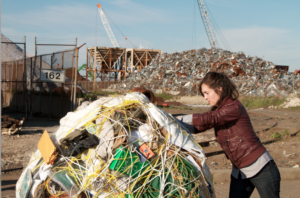 Mary Mattingly is a visual artist. She founded Swale, an edible landscape on a barge in New York City to circumvent public land laws.
Swale helped co-create the “foodway” in Concrete Plant Park, the Bronx in 2017. The “foodway” is the first time New York City Parks is allowing people to publicly forage in over 100 years. Mattingly recently completed a sculpture “Pull” with the International Havana Biennial with the Museo Nacional de Bellas Artes de la Habana and the Bronx Museum of the Arts. In 2018 she worked with BRIC Arts to build “What Happens After” which involved dismantling a military vehicle and deconstructing its mineral supply chain. Mattingly is currently artist in residence at the Brooklyn Public Library and is working towards an Ecotopian Library,  a learning center for art and creativity in the face of climate change. Her work has also been exhibited at Storm King, the International Center of Photography, the Brooklyn Museum, and the Palais de Tokyo. Her work has been featured in Aperture Magazine, Art in America, Artforum, Sculpture Magazine, The New York Times, New York Magazine, Le Monde Magazine, New Yorker, and on BBC News, NPR, on Art21. Her work has been included in books such as MIT Press Documents of Contemporary Art series titled “Nature”, and Henry Sayre’s A World of Art, published by Pearson Education Inc.