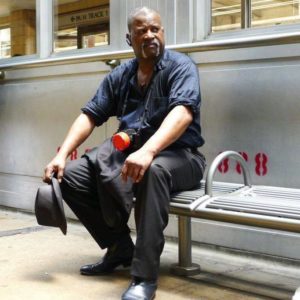 Kevin Blythe Sampson, 64, is a sculptor, painter, Muralist that is recognized for tackling difficult issues that concern him and his Newark, N.J., neighbors.

Kevin Blythe Sampson was born in Elizabeth NJ on November the 28th 1954. He is a product of growing up in a household that was totally committed to civil rights and community concerns, and this continues to be a recurring theme in his work. Kevin considers himself to be a “we shall over come Baby.”

Kevin Sampson grew up in house hold where many of the local marches were planned and many national leaders would meet with his father. They included Ruby Dee, William Kunsler, Malcolm X, Dick Gregory, Robert Ferris Thompson, Congresswoman Shirley Chisholm and many more. This had a strong effect on both Kevin’s Art and his life

Kevin became a police officer-Detective for the city of Scotch Plains New Jersey where he served for over 20 years. He is the first African American Uniformed Composite sketch Artist in The country.  He received numerous commendations for his work as both a police composite artist and a detective including the 200 clubs medal of valor, (for saving a life).

He took an early retirement after the death of both his wife and an infant son, in separate illnesses.

Kevin and his two young children who had lived in Englishtown NJ for seven years now moved to the (ironbound section) of Newark New Jersey were he has lived for over 25 years.

Kevin has been a gallery artist with Cavin-Morris gallery N.Y, N.Y since 1992

He is a mentor to many of Newark youths and has assistant a whole crop of young artist in obtaining admissions into the various art schools in the metro area. Kevin was successfully walked over ten young people into and through various Art schools in New York.

His work is in numerous collections including several museums. He is a past artist in residence at the Cathedral of St John the Divine and maintains a close friendship with his Mentor (the Retired Dean of the Cathedral) the Very reverend James parks Morton.

Over the course of the past three few years Kevin and his “Crew” have completed over  five murals with the City of Newark’s, ”City Mural Program”. Including the Mural for this year Outsider Art Fair 2018, NY, NY.

Kevin was recently selected as “100 People in Newark, by the 100 People foundation.

Kevin recently did the voice over for an upcoming appearance on the PBS children’s Cartoon “Arthur”. He was turned into a cartoon and will play himself in the segment.