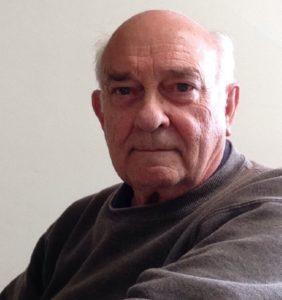 Maui has been Dick Nelson’s home since 1975, when he arrived as the Director of the Wailea Arts Center. Hawaii was not new to him, for his family had moved to Hawaii from Sodus, N.Y. when he was five years old. He graduated from Punahoe School, received his bachelor’s degree in art from the California College of Arts and Crafts, served as a Marine lieutenant in Korea, and returned to accept the position of Art Department Chairman at Punahoe. During his twenty-two years with the school, he spent his summers painting watercolors.

A sabbatical leave at Yale provided Dick with a once-in-a-lifetime experience to take the Josef Albers’ color course. There has been no greater influence on his educational career., and the residual benefits are very much in evidence today. He earned his master’s degree during his second sabbatical at Ohio State University.

He now pursues his own career in painting and teaching. His days are currently divided between these two loves. He has brought a color process to watercolor painting which he discovered while working with printers. By incorporating the same three primary colors used in printing, he was able to paint the full range of colors in what he calls his Tri-hue pallette. As a result of this approach, Dick developed a Tri-hue teaching and painting device. Although his teaching is primarily done in his studio today, he has participated in numerous workshops nationally and in Canada.

To order his CD on color, with critique, email him here – trihue@hawaii.rr.com.