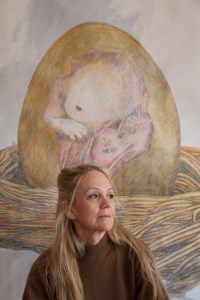 Ann McCoy is a New York-based sculptor, painter, and art critic, and Editor at Large for the Brooklyn Rail. She was awarded a John Simon Guggenheim Foundation Fellowship in 2019. She taught art history, the in the graduate design section of the Yale School of Drama until May 2020, and the Art History Department at Barnard College from 1980 through 2000.

Ann McCoy’ work is included in the following collections: the Metropolitan Museum of Art, the Los Angeles County Museum of Art, the Hirshhorn Museum and Sculpture Garden, the Museum of Modern Art, the National Gallery of Australia, the Roy L. Neuberger Museum, the San Francisco Museum of Modern Art, and the Whitney Museum of American Art, among others. Ann McCoy has received the following awards: the John Simon Guggenheim Fellowship, the Asian Cultural Council, the Pollock Krasner Foundation, the Adolph and Esther Gottlieb Foundation Award, the Award in the Visual Arts, the Prix de Rome, the National Endowment for the Art, the Berliner Kunstler Program D.A.A.D..

Ann McCoy worked with Prof. C.A. Meier, Jung’s heir apparent for twenty-five years in Zurich She has studied alchemy since the early seventies in Zurich, and Rome at the Vatican Library.