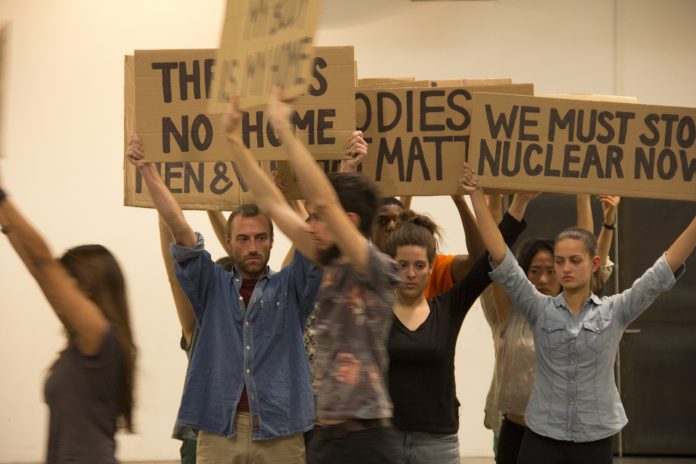 Tsuneko Taniuchi Born in Hyôgo, Japan. Since 1987, she has lived and worked in Paris.

She graduated from Kobe college, Sociology department, where she majored in the History of Western Culture. Then she moved to Paris to enroll the Ecole nationale des beaux-arts, Paris. She is a performance artist who works with photography, video and installation.

Since the first Micro-Events which occurred in 1995, Tsuneko Taniuchi’s work has critically engaged with contemporary society. Constructed with great precision, each Micro-Event questions the relationships between individuals and societies.

By reconstructing specific situations, each of her Micro-Events redefine space and time, between the work, the public, and the artist. These tensions, these engagements between the artist and the public through their shared experiences, here and now, constitute a work and, in their immaterial character, inscribe the memory of the Micro-Events (Performances). The Micro-Events question the boundary between reality and art; thus, it is a question of upsetting reality, traditions, representations, and overturning codes, from the point of view of intersectionality and post-colonial and global capitalism among other topics.

These micro-events were born from urban social networks which are coming together and coming apart every day, continuously moving their frontiers. It is precisely the idea of frontier that is interesting to Taniuchi and that she is trying to highlight, as the limit between art and reality, but also the one that prevails in the sharing of identities (the multiplicity of identities), whether they are based on sexual orientation, gender, social classes or culture.

Her installation “Micro-Event /Weddings Anniversary” is currently held at MAC Musée d’art Contemporain, Marseille, France in Quel Amour !?, set up after her performance at the Centre Pompidou Paris 2010 (Public collection of the CNAP – Centre national des arts plastiques in 2013). She has created to date forty-nine micro-events since 1995.

She is currently working at the Micro-Event n° 50 for which she obtained the grants from the CNAP (Centre National des Arts Plastiques) 2018 and the FNAGP (Fondation Nationale des Arts Graphiques and Plastiques) 2017.

“Micro-Event / Weddings Anniversary”, Centre Gorges Pompidou, Paris, 2010
Tsuneko Taniuchi organises wedding ceremonies completed with officiant and sealed by a certificate authenticating the exchange of vows. In these fictive weddings, conducted like bona fide, solemn celebrations, Tsuneko Taniuchi ‘ties the knot’ with her chosen partner who maybe a man, a woman or even several persons. On the occasion of the festival “Rendez-vous du Forum Session 2“, at the Centre Gorges Pompidou in 2010, Tsuneko Taniuchi organized a “Weddings Anniversary“, to which she invited all her “husbands“ and “wives“ with whom she exchanged vows at her various micro-events, the first having taken place at the Jennifer Flay Gallery in 2002. This celebration aims to strengthen the bonds of these marriages and create a family, while glorifying the idea of profound freedom.