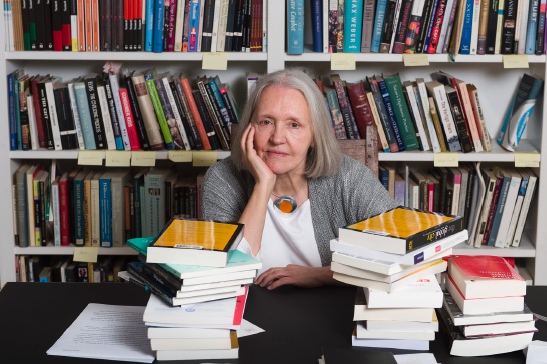 Saskia Sassen is the Robert S. Lynd Professor of Sociology at Columbia University and a Member of its Committee on Global Thought, which she chaired from 2009 till 2015.

She is a student of cities, immigration, and states in the world economy, with inequality, gendering and digitization three key variables running though her work. Born in the Netherlands, she grew up in Argentina and Italy, studied in France, was raised in five languages, and began her professional life in the United States. She is the author of eight books and the editor or co-editor of three books. Together, her authored books are translated in over twenty languages. She has received many awards and honors, among them thirteen doctor honoris causa, over 25 named lectures, named one of the hundred women in science, the 2013 Principe de Asturias Prize in the Social Sciences, election as a Foreign Member of the Royal Academy of the Sciences of the Netherlands, and made a Chevalier de l’Ordre des Arts et Lettres by the French government. 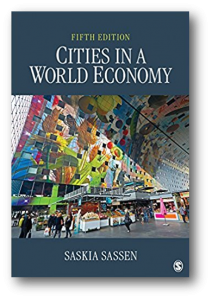 In each of the four major completed projects that comprise her 30 years of research, Sassen starts with a thesis that posits the unexpected and the counterintuitive in order to cut through established “truths.” These projects engendered four major books and a new major project “An Ethics of the City.” There are also a few smaller books and about 40 academic articles in peer-reviewed journals.

Her first book was The Mobility of Labor and Capital (Cambridge University Press 1988). Her thesis went against the established notion that foreign investment would prevent emigration from less developed countries. She posited and documented that foreign investment in less developed countries actually tends to raise the likelihood of emigration if that investment goes to labor-intensive sectors and/or devastates the traditional economy. In brief, her thesis went against established notions that such investment would retain potential emigrants.

In The Global City  (Princeton University Press 1991; 2nd ed 2001) her thesis is that the global economy needs very specific territorial insertions, notably in cities. This went against the dominant notion that leading sectors could locate anywhere given digitization. Further, in a counter-intuitive move she posits that this need for well-defined urban insertions is at its sharpest with highly globalized and digitized sectors such as finance –precisely those sectors seen as not needing cities. This went against established notions at the time (the 1980s and 1990s) that the global economy transcended territory and its associated regulatory umbrellas, and that the most advanced sectors would leave cities. At its tightest, her proposition is that global cities are shaped/fed by the rise of intermediation functions at scales and in ways that go well beyond what we saw in earlier phases of capitalism.

In Territory, Authority, Rights: From Medieval to Global Assemblages (Princeton University Press 2006), her thesis is that today’s partial but foundational global transformations, from economic to cultural and subjective, actually take place largely inside thick national settings and institutions. But they do so in ways that denationalize the national. She conceptualizes denationalizing dynamics as operating in the shadows of the more familiar globalizing dynamics. This denationalizing of what was historically constructed as national is more significant than much of the self-evidently global. A guiding question running through this book is how complex systems change. One key finding is that in complex systems such change is not necessarily highly visible: it often consists of existing systemic capabilities shifting to a new set of organizing logics — in ways that make those capabilities look as more of the same.

Her most recent project is developed in two books: Expulsions: Brutality and Complexity in the Global Economy (Harvard University Press/Belknap 2014), and the forthcoming Ungoverned Territories? (Harvard University Press 2018). The organizing thesis in Expulsions is that our global modernity is marked by systemic expulsions of all sorts. Such systemic expulsions go well beyond simply more inequality, poverty, refugees in the global south, and so on. It is often our complex intermediary processes, requiring admirable types of talents and knowledge, which are facilitating brutal, often elementary, expulsions. This book also calls for a rethinking of the knowledge silos we have produced. In Expulsions, she posits that we need to de-theorize in order to re-theorize. In Ungoverned Territories? she examines the making of ambiguous jurisdictions that escape the grip of existing national and international institutions. This volume will include The 2012 Storrs Lectures in Jurisprudence and Philosophy she delivered at the Yale University Law School.

She has completed Cities at War: Global Insecurity and Urban Resistance, a book co-edited with Mary Kaldor (London School of Economics), forthcoming with Columbia University Press in 2019. It is based on fieldwork by a team of researchers in 8 major cities with high levels of conflict, ranging from Ciudad Juarez to Baghdad. It is funded by a large grant from the European Union Research Council.

Sassen has now started a new project on what an “Ethics of the City” would actually consist of. She posits that it will inevitably be quite different from our much-admired classic texts on ethics, which hover safely above the inequities of daily life in a large city. An ethics of the city is perhaps inevitably a bit of an ugly-duckling ethics, an imperfect ethics. The working thesis is that it is an ethics where social justice, rather than a purer and more elevated notion of ethics, becomes as strong as all the forces aligned against it. Cities are sites of inequality and indifference. Therein resides the challenge and the necessity to understand when do inequality and indifference become profoundly unjust and destructive of people, their efforts, and the city itself.  Her first three sites for research will be New York City, Tunis, and Beijing.

She also continues her work in a large collective project, The Urban Age, focused on extreme urbanisms. The main funder over tenyears has been the Herrhausen Foundation (Berlin). She has now completed a three-year project on Mobilities, supported by a research gift from AUDI.

Besides the already mentioned books, she is the author of A Sociology of Globalization (Norton 2007); Losing Control? Sovereignty in an Age of Globalization (The Schoff Lectures of Columbia University, published by Columbia University Press in 1996, with a new edition in 2016); Globalization and its Discontents. Essays on the Mobility of People and Money (New Press 1998); Guests and Aliens (New Press, 1999), Cities in a World Economy (Pine Forge/Sage, 1994; coming out in its 5th updated edition in 2018. Her edited books are Deciphering the Global: Its Scales, Spaces and Subjects (Routledge 2007), Human Settlement and the Environmental Challenge (Oxford: EOLS 2006), Global Networks/Linked Cities (Routledge 2002), and the co-edited Digital Formations (Princeton University Press 2005.

All her edited books are based on larger collective research projects, sponsored by funding entities. Global Networks, Linked Cities (London and New York: Routledge 2002) is based on a large multi-year UNU based and sponsored project with researchers in six countries. A second edited book recently completed is Human Settlement and the Environmental Challenge (Oxford: EOLS 2006), one of the 14 volumes in the UNESCO Encyclopedia on the Environment; this involved setting up a network of researchers and activists in over 30 countries. The co-edited Digital Formations: Information Technologies and New Architectures in the Global Realm (Princeton University Press 2005) is based on a four year project she chaired for the Social Science Research Council, with support from the Ford Foundation. Finally, Deciphering the Global: Its Scales, Spaces and Subjects (Routledge 2007) is based on the Transnationalism Project set up and run by Sassen at the University of Chicago, 1998-2007.

Her recent professional activities include the following completed projects: Member of the Board of Directors, IBA (an initiative supported by the German Government with 300 million Euros for the upgrading of a vast poverty area in the North of Germany); Member, International Advisory Board chaired bythe Prime Minister of the Netherlands, for the Mayor of Rotterdam, Ahmed Aboutaleb, at the time the first elected Muslim Mayor of any major city in Europe; Member of the Panel on Urban Population Dynamics, Committee on Population of the National Academy of Sciences; Chair, Information Technology and International Cooperation Committee of the Social Science Research Council; Director, Transnationalism Project of the University of Chicago; and co-Chair of the economy section of the Global Chicago Project. She was one of eight experts on the Mastercard Worldwide Centers of Commerce Index, a vast project involving 60 variables, from economic to social, covering 75 major and minor global cities around the world.

Besides English, she is fluent in Spanish, Italian and French, and good in Dutch and German. She also studied Russian and Japanese.