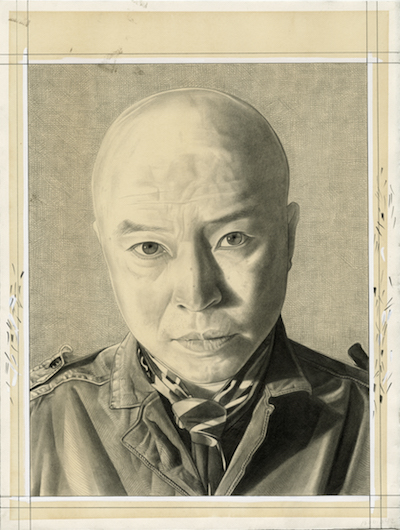 Phong Bui (born in Huế, Vietnam) is an artist, writer, independent curator, and Co-Founder, Publisher and Artistic Director of The Brooklyn Rail, a free monthly arts, culture, and politics journal. Bui was named one of the “100 Most Influential People in Brooklyn Culture” by Brooklyn Magazine in 2014. In 2015, “The New York Observer” called him a “ringmaster” of the “Kings County art world.”  He lives with his wife the painter Nathlie Provosty in Greenpoint, Brooklyn.

In addition to fostering the creative energy behind The Brooklyn Rail, Bui publishes Rail Editions, a venture that features experimental poetry, fiction, artist interviews, and art criticism. Bui contributes essays, reviews, and interviews to the Brooklyn Rail, and creates portraits of each month’s featured interviewees. He has written articles for Matador Magazine, Art in America, and Riot of Perfume, among others, as well as essays for exhibition catalogues and books on artists. In addition to his writing, he is the producer and host of the program Off The Rail at Art International Radio, where he interviews artists, art historians, writers, and other people of interest.

Bui has curated over 50 monographic and group shows since 2000, including a first anniversary commemoration of Hurricane Sandy: Come Together: Surviving Sandy, Year 1, “a sprawling, encompassing, inspiring exhibition of works by some 300 artists,” according to Roberta Smith of the New York Times. The show was ranked as New York’s #1 exhibition in 2013 by Jerry Saltz of New York Magazine. In 2013 he initiated the Rail Curatorial Projects, which aims to curate exhibitions as social experiments, including Bloodflames Revisited at Paul Kasmin Gallery and “Spaced Out: Migration to the Interior” at Red Bull Studios (2014), a two-part exhibition entitled Intimacy in Discourse: Reasonable and Unreasonable Sized Paintings at Mana Contemporary and SVA Chelsea Gallery (2015), Hallway Hijack in Collaboration with the Leroy Neiman Center for Print Studies at 66 Rockwell Place (2016), and most recently a large two-part exhibition Artists Need to Create on the Same Scale that Society Has the Capacity to Destroy and Friends in Solidarity at Mana Contemporary (2017).

A graduate of the University of the Arts in Philadelphia, PA, Bui continued his postgraduate studies at the New York Studio School of Drawing, Painting, and Sculpture and studied independently with Nicolas Carone. Bui is a multi-disciplinary artist whose work includes painting, sculpture, and site-specific installation. Since 2012 he has been working on his on-going social sculpture/environment, which attempts to realize “art as social activity” and to reinforce the notion that “the process of art making is the art.” In 2006, Bui won the Award in Art from the American Academy of Arts and Letters, and the Eric Isenbeurger Annual Prize for Installation from the National Academy Museum. His work has been featured in 18 solo exhibitions and group exhibitions at Show Room Gallery, Sarah Bowen Gallery, Four ½ Project, San Art, the Brooklyn Museum of Art, the North Dakota Museum of Art, Colby Museum. Bui has lectured at Skowhegan School of Painting and Sculpture, Columbia University, Cooper Union, Bard College, and taught at Yale University, Rhode Island School of Design, University of Pennsylvania, and the School of Visual Arts where he taught graduate seminars in MFA Writing and Criticism and MFA Photography, Video, and Related Media (2012 to 2014). He has won an Arcadia Traveling Fellowship, a Hohenberg Traveling Fellowship, and a Pollock-Krasner Foundation Fellowship. He was the keynote speaker of The Scholastic Art and Writing Awards, and was the Visionary Honoree at Art in General’s Annual Benefit (2014), a recipient of the Esther Montanez Leadership Award (2016), and the Dorothy and Leo Rabkin Award in Visual Arts Journalism (2017). He is also a board member of The Miami Rail, The Third Rail of The Twin Cities, Sharp-Walentas Foundation, The Louis Comfort Tiffany Foundation, AICA (International Art Critics Association), Anthology Film Archives, Studio in a School, among others.