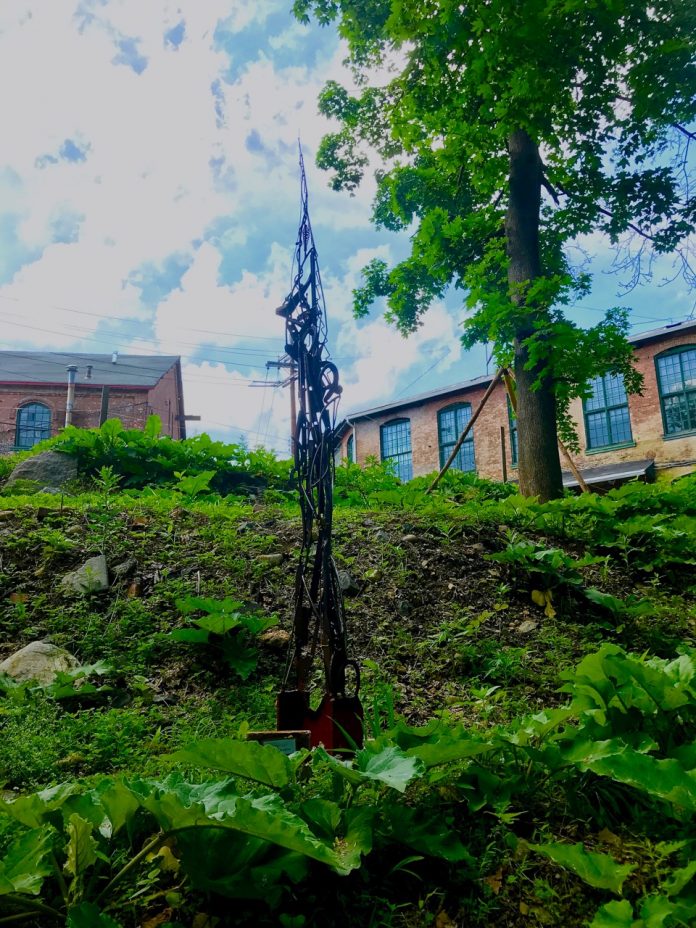 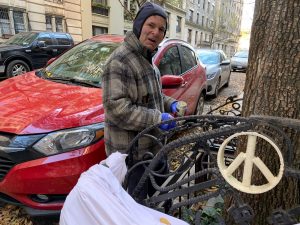 Linus Coraggio invented a genre of street art in 1982 called 3-D Graffiti – “outstalling” many examples around New York City on ‘’no-parking’’ signposts. He was the founder of the Rivington School Sculptors Group and welded a massive post-apocalyptic sculpture garden of rusted metal that rose menacingly above Forsyth and Rivington Streets on New York’s Lower East Side. He was also the architect of the Gas Station (the performance space, after hours club and sculpture garden) that sat on Second Street and Avenue B well into the 1990s. These seminal downtown art spaces were the vanguard of wild autonomous art activism in the face of rapid gentrification. Coraggio is known for his abstract sculpture, his sculptural furniture, woodcut prints, expressionist graffiti paintings and his reimagined motorcycles (utilizing cellphones, barbie dolls, metal, bamboo, and plastic mixed with any other urban or country detritus imaginable).

A self-confessed ‘’odd kid’’, Coraggio was always drawing and making stuff. One entire summer was engulfed by building a 36’’ high pyramid of 15,000 toothpicks carefully glued into the giant configuration. When it was done he asked his mother what to call such an object and she replied “sculpture’’.  The die was cast.

The son of avant-garde composer Henry Brant, with whom he often collaborated, Coraggio grew up accompanying his mother Pat Brant on her trips across the rust belt as she photographed abandoned industrial sites for her Village Voice column. This experience informed his later choice of “used” metal as his medium when he discovered welding at Purchase College. Using materials that could be found in vacant lots or pilfered from building sites across lower Manhattan and the city’s outer boroughs, Corragio’s richly graphic street art provided a 3-D counterpoint to the 2-d spray paint  graffiti practiced by such contemporaries as Keith Haring and Jean Michel Basquiat.

Despite his lifelong immersion in making and showing art, Coraggio has been somewhat hidden or marginalized within the recognized historical canon of the major artists of the past 35 years. Yet he has received sporadic attention by the art press and inclusion in several important books, catalogues and shows about street art or the downtown 1980’s/1990’s art scene. As more documentation emerges and Coraggio’s activities coalesce, it is likely his maverick work will be better known in his lifetime.

Corragio attended the Whitney Museum Studio Program in 1986 and has done  sponsored  large scale public art in Helsinki Finland, Rotterdam holland,, Lintz Austria,Nagoya and Osaka japan . He continues to make art and live on the Upper West Side of New York City, which has been his main base for over 50 years.