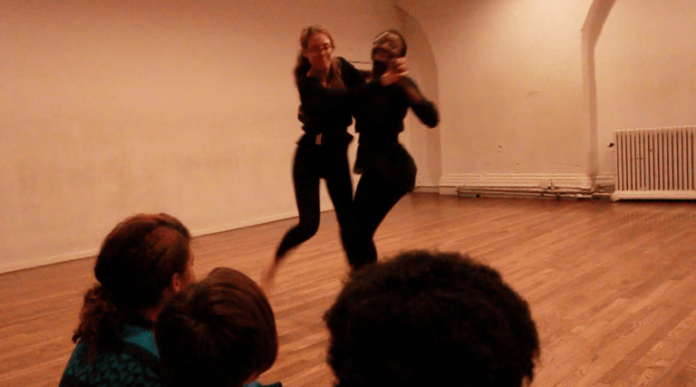 Lindsay Benedict is a contemporary artist, filmmaker, dancer, writer, and feminist currently living in Brooklyn and teaching in the Fine Arts department at Parsons, The New School. She got her BA from Williams College in Massachusetts as a double-major in Biology and Studio Art, then moved to Brooklyn, Taipei, Paris and finally settled in the Bay Area for seven years. In Oakland and Berkeley, Benedict pursued radio journalism at KQED and KPFA. As a freelance journalist, she was mobile and covered the United Nations during the Iraq war, wrote for the Vermont Standard and was the documentary intern for a C-SPAN Rocky Mountain tour. These skills were accompanied by audio technician work. Benedict ultimately found the medium of journalism to be too rigid and turned towards art to complicate the vehicle with which information could be disseminated.

In 2007, Benedict got her MFA degree from the University of California at Berkeley. She developed an artistic practice of presenting fragments and gestures that examine and question social relations. In her work, affect and raw emotion are often deployed to disrupt and destabilize any simple reading of human connections. She took courses with Anne Walsh, Trinh T. Minh-ha, Kaja Silverman, TJ Clark and others. Self-enquiry and self-presentation is central to her practice, throwing light on the cultural coding and constructedness of our identities. By using her body to work through issues of race, culture, religion and gender, Benedict sets out a unique set of DIY parameters to explore. While at UC Berkeley, Benedict participated in the Visuality and Alterity working group and organized the Out of TimeSpace conference with Okwui Enwezor as a keynote speaker across many sites including SFAI. She also contributed to the Berkeley Center for New Media’s ‘Arts, Technology and Culture’ community by recording and creating audio digests of public lectures, called “Lectures with Lindsay.” During her tenure in the Bay Area she screened her films at the Pacific Film Archive, New Langton Arts, the Detroit Museum of New Art (MONA); and exhibited work at the Berkeley Art Museum, in the Emergency Biennial, and later a solo show at Martina }{ Johnston Gallery.

While in grad school at UC Berkeley, Benedict worked on her “performed film portraits,” which is a living exchange with a loved subject that is captured on Super 8/16 mm film in one take. She sets the context and frame, then loosely choreographs a sketch which can be negotiated from behind the camera during the film shoot. “Shooting analog film with my loved ones as the subject is an excuse to archive a relationship at the moment the work is being made,” says Benedict. “These performed actions cause intimacy between me and the friends/lovers/mentors as I create a situation to happen in front of the camera.” In the “performed film portraits,” the loved subjects are not dancers or actors – they are untrained bodies negotiating a performed collaboration with the camera operator (Benedict) in real-time. A whole roll of film, 3 minutes, is shot without rehearsal in order to make permanent a relation that is inevitably fluctuating. [see image]

After graduate school, Lindsay Benedict was invited to participate in the Whitney Independent Study Program and moved back to Brooklyn. Her work developed primarily through physicality and the use of the body to articulate emotions. She used film, photographs, paintings, performances, and sound pieces to research the impossibilities of relationships. In New York City, Benedict was invited by choreographer and curator Will Rawls to be in Movement Research Spring Festival’s “48 x 4 x 3”. Meanwhile, she was collaborating with friends in Bushwick on an ephemeral dance group called “Damn Girl!” and on an interpretive girl band called “Knock Me Up.” Two collaborators from this period, Lydia Bell and Letitia Spangler, continue to work with Benedict on developing contemporary works and engaging ideas. With Bell, they created and performed “He Who Blinks First” and “He Who Blinks First (with boys)” at Eden’s Expressway, The Tank, and Dixon Place. And more recently with Spangler, the work “KINDREDS: a song about animals” was performed at Danspace in 2016. In NYC, her sound art, photographs, films and objects have been exhibited at Jack Hanley, Bose Pacia, Rotunda, PS122 and PARMER galleries in NYC.

Benedict currently lives in Brooklyn with her 8 month old daughter as a single mom, however from 2010 to 2013, Benedict moved to France for a post-dîplome which lead to commissioned works and artist residencies in Europe. At the contemporary art venue Le Confort Moderne, Benedict created a site-oriented performance work called “Baby, I just want to dance,” in which she invited the local population without auditions to perform three minute dances in the parking lot with a boom box. At Le Cyclop, an art center and museum in the woods outside of Paris, Benedict again invited the people of that neighborhood to contribute to an evening-long work with 75 people called “Do you know there’s a Monster in the woods?.” She also screened some of her film works at Les Laboratoires d’Aubervilliers, PHAKT-Centre Culturel in Rennes, and Languedoc-Roussillon Cinéma in Montpellier.

While living in France she temporarily moved to Italy to attend the Antonio Ratti residency and the Pistoletto Foundation. It was in Turin, Italy that Benedict with Isamit Morales, Lia Cecchin and Lisa Perrucchi precariously created a collective called “Vecchio Merda Danzband.” Depending on the cycle of the moon, Vecchio Merda Danzband fluctuates in medium but always mines heartbreak culture. The Danzband had a number of local interventions for example at an outer warehouse space called Bunker, in the artist-run gallery Cripta 747, and at the convergence of the river Po with the river Dora. Finally, VMDB was commissioned by Centrale Fies to perform a traditional-style concert at their “Skillbuilding” performance festival. The Danzband created melancholic songs, instructional dance steps and purposeless karaoke. Because the core members speak in three different languages they allow for surprises, mistakes and magic to be made. That perilous structure was coupled with a determination to explore the emotionally disruptive aspects of love.

In 2013, Benedict moved back to Brooklyn and re-connected with a bunch of friends from her Whitney Independent Study Program through Shifter’s “Dictionary of the Possible,” a bi-monthly meeting and public discussion debating definitions of keywords. In 2015, she performed while 3 months pregnant the work “overseen/unseen in Territory” with Nadia Bongo at Movement Research’s Open Performance, which probed authority in relationships through spatial possessiveness [see image ]. Benedict’s recent work has been exploring immediacy, which she describes as a reverence for the present, an attention to emotions and intuition, and an access to the fractured self that can be located in fleeting moments.

She has published her texts and 2D works in Jenaeveeve press, HyperAllergic.com, Shifter, Mousse publishing, Nobody Puts Baby In A Corner zine, and Naked Attic.