Liat Yossifor was born and raised in Israel and moved to the United States in 1989. Her early monochrome portraits of women, posed as soldiers, with the features of the sitter appearing as though etched into immersive fields of pigment, resist easy identification. These early paintings explore the effects of cultural displacement and the contradictions of identity. Her series of landscape paintings consists of abstracted battle scenes composed of multiple figures, where bodies merge with cinematic landscapes. Yossifor’s subsequent work is divided into two distinct series of abstract monochrome paintings, each adopting aspects of her previous bodies of work. Her monochrome series of gray paintings and black paintings are further delimited by differences in duration, pigment, material, and process.

This interview was conducted in writing, not audio, please read the Q and A below.

Brainard Carey: What is happening in the studio right now?

Liat Yossifor: My work is changing right now. Part of my process in recent years has been to bury line work with thick paint.  Recently, I have been covering less, and pushing the line work up to the surface. The line work is now more pictographic, even illustrative in parts of the painting. If I was excavating before, I am now letting some gestures hang right on top of the surface, and creating an extra layer of information. In some ways, I want the painting to be more direct and it is starting to look like sgraffito, which was always part of the work, but is now more dominant and used all-over.

I had a show in March of this year, and the logical question that follows a show is what is next, but, for me, it is not always a genuine question to the daily studio life where I am developing a language over time and not per show. But, this time, was a little different. I knew what I wanted to follow this show and how, at least a general sense of things to come. I am also looking at the palate of some sculptural surfaces and attempting to translate those into paint. For example, I am working now on a red clay monochrome. There is the issue of mimicking the color, which is not easy… because I want it to look and feel like wet clay.

BC: How do you think about making work in this socio/political global place we’re in?

LY: I am not from here (born and raised in Israel) so I have always been on alert; this agitated state and global connectivity is part of my psychology always when I make work. My own work recently shifted from light grey to black paintings, and because color is content, this changed the essence of the paintings. But, I would like to answer this question about painting at large (I am not sure this is your question to me, but I have been thinking about what it means to paint now, in the larger sense, during these cultural wars). Painting is reactive and immediate, I would argue that making work right now is like absorbing cultural trauma and telling the viewer fairly quickly about it. The socio political upheaval right now is told in real time, there is no distance, and less time to reflect. This is different than post September 11 for example; the consensus then was that people needed more time to reflect.

I think there are many ways in which making work now will be understood later because not all the shifts are obvious or even clear to the artists (or curators). But, I would say that the approach is more extreme and more didactic now. In the field at large, some painting remains isolated (and this is not a qualitative statement; painting can choose to be untouched and do something entirely different on its own) but there is a return to the figure and identity, and to a subject matter. I was describing to a friend recently how there was a conversation about portraiture in the early 2000s that attempted to remove all psychology and identity from a portrait. This would be laughable now…

I am not sure though about this approach working itself out as a trend. I think some of the new work being made now is so busy communicating that it suffers from not paying attention to the condition of painting. Some of the work is not aware of the 90’s?  In the best case scenario, the socio political landscape would be met by a subject and a painting that are successful as one. There are a lot of art historical examples that make painting particularly able to carry the climate of the world in it. I remember reading how The Death of Marat was painted in such urgency that the economy of space (all that beautiful un-worked space around Marat) was a result of having to get the painting out to the world while it mattered.

BC: Is there anything you wanted to say, that I didn’t ask about your upcoming work or an exhibit you want to guide the reader to?

LY: If I could guide the reader it would be to my recent exhibition at Miles McEnery Gallery in NY in March 2018. I already talked about the shift to a dark palate, and this exhibition consisted of four large new black-on-black works in the front room and four greys in the second room (to be seen in natural light). The black paint was an impulse, and then a complication…while working, the shiny black surface resists pictorial intentions. This prompted me to name them “Walls” and think of them as physical objects and focus on their presence as things, not rely on their inner space. I kept thinking about a Gauguin quote “Reject black, and this mixture of white and black that they call grey. Nothing is black, nothing is grey…” and so I went along, I turned to sculpture and etching. I had to manipulate the paint to operate like another material that can stay in place while I etch. I am not a sculptor, but I tell myself stories about sculpture when I paint (I imagine sculpture, and I often tell my friends about my next sculpture, but instead I make a painting…). Having sculptural intentions that are trapped in the two dimensions of a painting is different than moving around mediums. It is more like having a dissatisfaction with a state of being and expressing this without switching to another being. Looking at relief work is always on the verge of frustrating to me, because it is as if the subjects want to become independent from the block of stone but cannot. This circles back to what I mentioned earlier about what I am doing now in the studio, which is to push this conversation about the pictorial and the physical further. What I am working on now will be shown next at Patron Gallery in Chicago.

BC: What are you reading now?

LY: I recently enjoyed a wartime biography by Sarah Kaminsky entitled Adolfo Kaminsky: A Forger’s Life. This is the story of a man who started forging identity papers for the Resistance in France during the Nazi occupation at a young age (he then continued to work for different resistance groups for most of his life). It may be interesting for artists to learn that he was an expert in dyeing cloth, which is why he knew how to erase inks from forged documents. It is also fascinating, and great story telling. 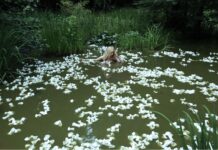