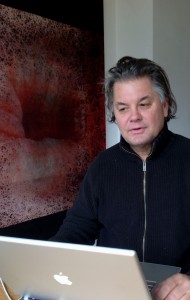 Joseph Nechvatal’s paintings and animations conjure up an enigmatic world of depth that signals a contemporary practice engaged in the fragile wedding of image production and image resistance. He brings a subversive reading to computational media by presenting an artistic consciousness that articulates contemporary concerns regarding surveillance, encryption, safety, privacy, identity and objectivity.

Since 1986 Nechvatal has worked with ubiquitous electronic visual information, computers and computer-robotics. His computer-robotic assisted paintings and computer software animations are shown regularly in galleries and museums throughout the world. From 1991-1993 he worked as artist-in-resident at the Louis Pasteur Atelier and the Saline Royale / Ledoux Foundation’s computer lab in Arbois, France on The Computer Virus Project: an experiment with computer viruses as a creative stratagem. In 2002 he extended that artistic research into the field of viral artificial life through his collaboration with the programmer Stéphane Sikora.

Nechvatal earned his Ph.D. in the philosophy of art and new technology at The Centre for Advanced Inquiry in the Interactive Arts (CAiiA) University of Wales College, Newport. From 1999 to 2013, he taught at the School of Visual Arts (SVA). His archive is housed at The Fales Library (Downtown Special Collection) at N.Y.U. His viral symphOny is archived and available for download here. His book of essays Towards an Immersive Intelligence: Essays on the Work of Art in the Age of Computer Technology and Virtual Reality (1993-2006) was published by Edgewise Press in 2009. In 2011 his book Immersion Into Noise was published by the University of Michigan Library’s Scholarly Publishing Office in conjunction with the Open Humanities Press. He is the editor of the  Minóy Punctum Press book/cd and his collected essays on art in Paris at Hyperallergic can be seen here. His current show, bOdy pandemOnium, is at Art Laboratory Berlin.  Learn more on his website.