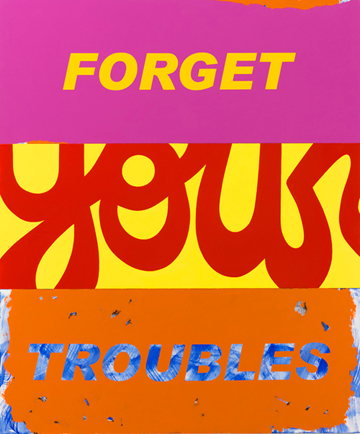 Deborah Kass is an American artist whose work explores the intersection of pop culture, art history, and the self. Deborah Kass received her BFA in Painting at Carnegie Mellon University, and studied at the Whitney Museum Independent Study Program and the Art Students League of New York. Her work is in the collections of the Museum of Modern Art; Whitney Museum of American Art; Solomon R. Guggenheim Museum; Jewish Museum (New York);Museum of Fine Art, Boston; Cincinnati Museum of Art; New Orleans Museum; National Portrait Gallery, Smithsonian Institute; Fogg Museum, Harvard Art Museums; and Weatherspoon Museum, among others, as well as numerous public and private collections.

In 2012 Kass’s work was the subject of a mid-career retrospective Deborah Kass, Before and Happily Ever After at The Andy Warhol Museum in Pittsburgh, PA. An accompanying catalogue published by Rizzoli, included essays by noted art historians Griselda Pollock, Irving Sandler, Robert Storr, Eric Shiner and writers and filmmaker Brooks Adams, Lisa Leibmann and John Waters.

Kass’s work has been shown nationally and internationally including at the Venice Biennale, the Istanbul Biennale, the Museum Ludwig, Cologne, the Museum of Modern Art, The Jewish Museum, New York, the National Portrait Gallery, and the Museum of Fine Arts, Boston. A survey show, Deborah Kass, The Warhol Project traveled across the country from 1999-2001. She is a Senior Critic in the Yale University M.F.A. Painting Program. Kass is represented by Vincent Fremont and the Paul Kasmin Gallery. Learn more about her work on her website by clickng here.