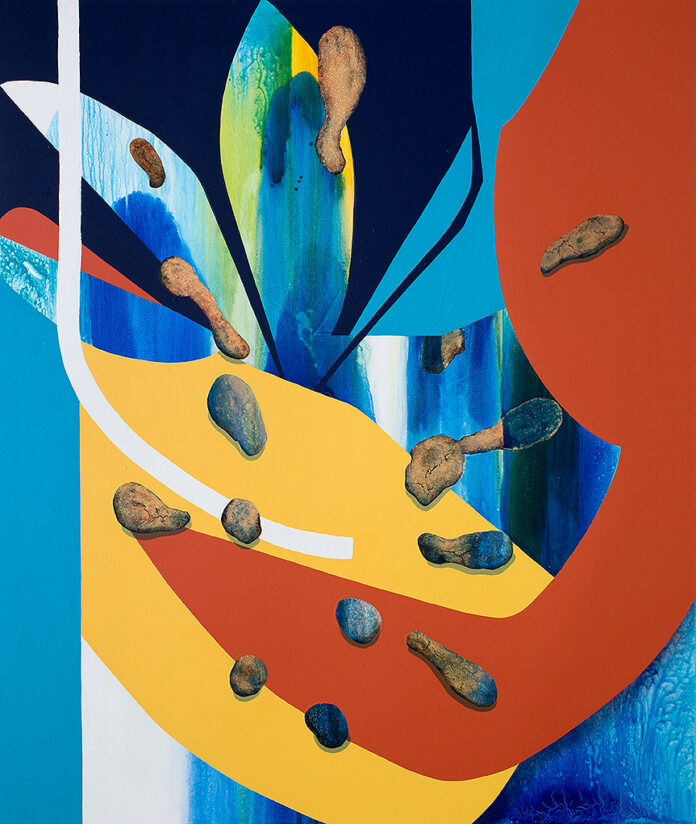 Carrie Moyer is an artist and writer known for her sumptuous paintings which explore and extend the legacy of American Abstraction, while paying homage to many of its groundbreaking female figures, among them Georgia O’Keeffe, Helen Frankenthaler and Elizabeth Murray. In equal measure abstract and representational, Moyer’s work proposes a kaleidoscopic worldview that embraces the sensual as much the rational. Playful logo-like silhouettes — vessels, towers, portals, meteorological phenomena, plant life, animal and human forms — demarcate arched prosceniums or abstract fields of color. These flattened archetypes and cheeky reference points often perform as compositional rigging around which flow cascades of paint, glitter and light. Whether invoking the natural or constructed world, inventive paint handling and succulent color seem to tempt all of the viewer’s senses, from sight to touch to taste (perhaps even sound!). The resulting spaces — lush and transporting — are uniquely Moyer’s own.Moyer’s work has been exhibited throughout the US and Europe.

Her paintings were featured in the 2017 Whitney Biennial. Previous museum shows include a traveling survey, Carrie Moyer: Pirate Jenny, that originated at the Tang Museum, Saratoga Springs, NY; and Interstellar, at the Worcester Art Museum, MA (2012). Between 1991-2008, Moyer and photographer Sue Schaffner collaborated as Dyke Action Machine!, a public art project that humorously dissected mainstream advertising through the insertion of lesbian imagery. Moyer’s writing has appeared in periodicals such as Art in America, Artforum, the Brooklyn Rail and monographs on Louise Fishman and Nancy Grossman.

She has received awards from the Guggenheim and Joan Mitchell Foundations, Anonymous Was a Woman, and Creative Capital among others. Moyer attended Pratt Institute (BFA), Milton Avery Graduate School of the Arts, Bard College (MFA) and the Skowhegan School of Art. She is of the Director of MFA Program in Studio Art at Hunter College. Moyer is represented by DC Moore Gallery in New York City.

The collaborative exhibition mentioned in the interview can be explored through this link to the Portland Museum.