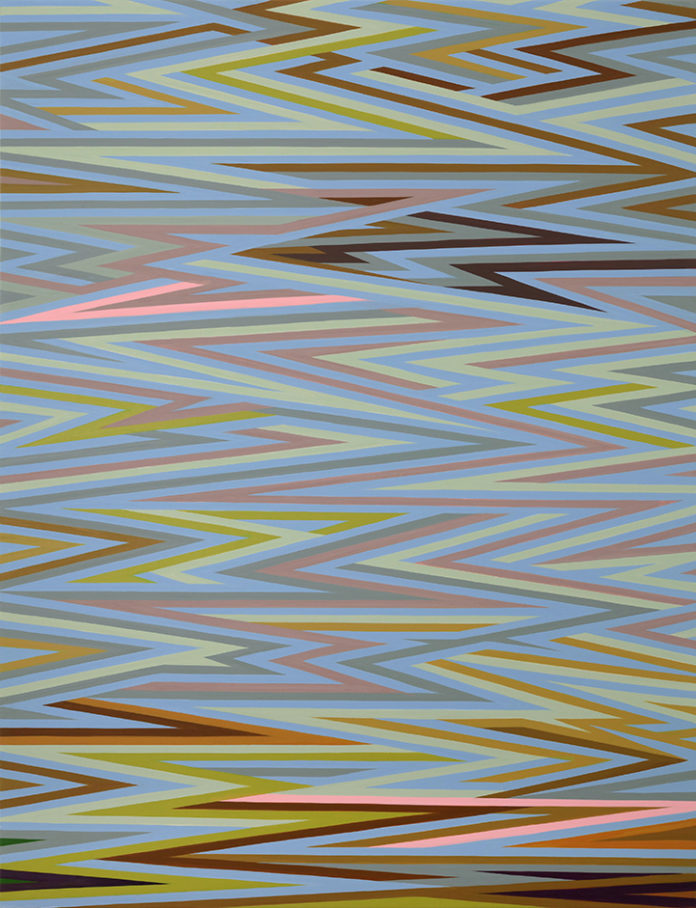 Reoccurring themes of technology and the manipulation of nature can be found in Brian Guidry’s paintings and installations. Guidry’s paintings range visually from compressed lines of color to abstract eruptions. The artist synthesizes color, sound and texture to create “digitized” or “dissolved landscapes,” using a specific color palette sampled from a variety of natural sources. The injection of these “natural” colors into geometric planes and constructions creates shapes and voids suggestive of portals or slips in time, leading the viewer over the precipice of the normal, into the magical realism of the uncanny, peculiar and quantum.

Brian Guidry lives and works in South Louisiana. He received his BFA from the University of Louisiana at Lafayette. He received his MFA in Painting from Pratt Institute, Brooklyn, New York. His work has been exhibited nationally and internationally. Selected exhibitions include; The Bronx Museum in New York; Gana Art Space, Seoul, Korea; the Odgen Museum of Southern Art in New Orleans; The Contemporary Art Center in New Orleans and the National Collage of Arts in Lahore, Pakistan. His work has been featured and discussed in Time Out Chicago, ArtForum, The Times-Picayune, Gambit Weekly, Pelican Bomb, The New York Times, and New American Paintings. His work is in the collections of the New Orleans Museum of Art; The Odgen Museum of Southern Art, New Orleans, LA.; National College of Arts–Lahore, Pakistan; New York Public Library, New York, NY; Pratt Institute Library, Brooklyn, NY; and Paul & Lulu Hilliard University Art Museum, Lafayette, LA.
The book mentioned during the interview was
“Hot, Cold, Heavy, Light, 100 Art Writings 1988-2018” , Peter Schjeldahl