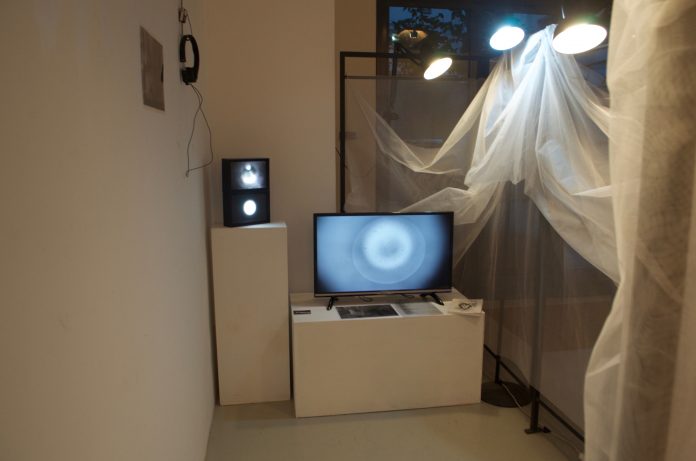 Anne Murray is a nomadic artist who challenges concepts of identity, nationalism, and citizenship. She travels to other countries to create works stimulated by different cultural settings and languages. She creates installations with video, sound, and photography, incorporating her own voice reading her poems as well as the voices of others as participants and collaborators in her projects. She is both an American and Irish citizen, currently living in Barcelona.
Most recently, Murray created Anna Greki’s Room an installation about the poet Anna Greki who fought for the independence movement in Algeria and who wrote the poetry collection Algérie capitale Alger during her incarceration in Serkadji prison in Algiers.  Murray was inspired to return in January 2018 and create a project in Algeria after having participated in the Mediterranean Biennial of Contemporary Art of Oran, which was curated by Tewfik Ali Chaouche and Sadek Rahim in July of 2017. She read the book Anna Gréki Les mots d’amour, les mots de guerre by Abderrahmane Djelfaoui as part of her research and met with the author at the artist residency Les Ateliers Sauvages in Algiers along with the poet and translator Lamis Saïdi who translated Anna Greki’s poems from French into Arabic. In this ongoing project, Murray has incorporated her original poetry, video and sound installation, and a docuart work (art documentary) about the poet.
Murray is also the curator of Cloud Conversations, a global collective of artists who are working to combat xenophobia, sexism, racism, religious intolerance, domestic violence, and climate change. She organizes livestream conversations between artists across the globe and installations of their work related to these topics.
In August of 2017, she presented the Cloud Conversations project and its artists at the World Humanities Conference in Liege, Belgium as part of the Art and Society Platform.