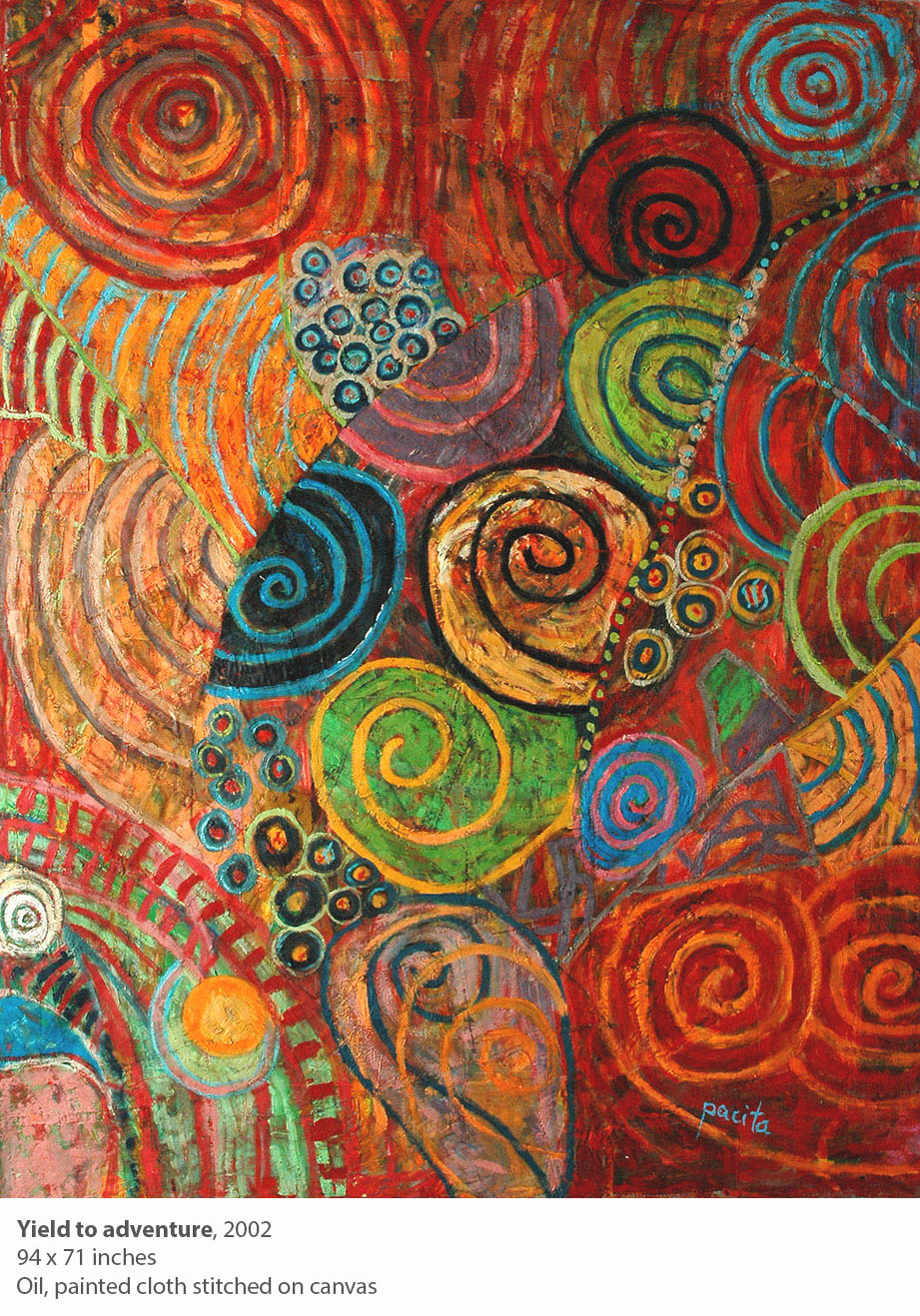 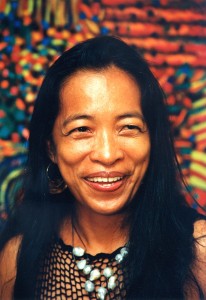 Pacita Abad (1946 – 2004) was an internationally renowned, Philippine-American painter who was born in Batanes, a small island in the South China Sea. Her 32 year painting career began when she traveled to the United States to study law, but later switched careers to dedicate her life to painting.

Pacita holds a Bachelor of Arts degree in Political Science from the University of the Philippines and a Master of Arts degree  in Asian History from the University of San Francisco, California. She then studied painting at the Corcoran School of Art, Washington, D.C. and The Art Students League in New York City.  Since that time Pacita never stopped being a gypsy artist, and painted the globe while working on six different continents and traveling to more than 50 countries. During her career Pacita created over 4,500 artworks, and her paintings were exhibited in more than 200 museums and galleries around the world.

Pacita’s artistic career, right up to her her early death at age 58, was a creative continuum exploring and expanding new mediums, techniques and materials. She incessantly pushed herself and her work forward year after year, never repeating any series or body of work no matter how successful. After her early years Pacita grew to reject the painterly emphasis on surface flatness, as she constantly sought ways to expand her painted canvases. She developed a unique, innovative painting style which she called trapunto painting, that fused spontaneous self-expression with hand-stitched painted surfaces covered with traditional materials, found objects and her signature vibrant colors.

It is a challenge to comprehend Pacita Abad’s artistic career as one unit as her work traversed from her: initial socially conscious beginnings of displaced people, political violence, refugees and immigrants from countries like Bangladesh, Sudan Dominican Republic, Cambodia and the Philippines; to vibrantly colored, hand stitched trapunto paintings depicting masks and spirits from Oceania, Java, Islands Southeast Asia, Africa and the Americas; to nature inspirations with paintings including the undersea world of the South China Sea, Australian Outback and Asia’s tropical flowers; to her most comprehensive and boldly colorful abstract paintings, prints, and mixed media collages on canvas, paper, bark cloth, glass and other mediums, that she focused on during the second half of her career. Pacita also did a number of noteworthy public art installations such as her “Masks from Six Continents” in the main Washington Metro Station, and just before she died the 55 meter long “Singapore Art Bridge” which she covered with 2,350 colorful circles at the same time she was undergoing treatment for cancer. 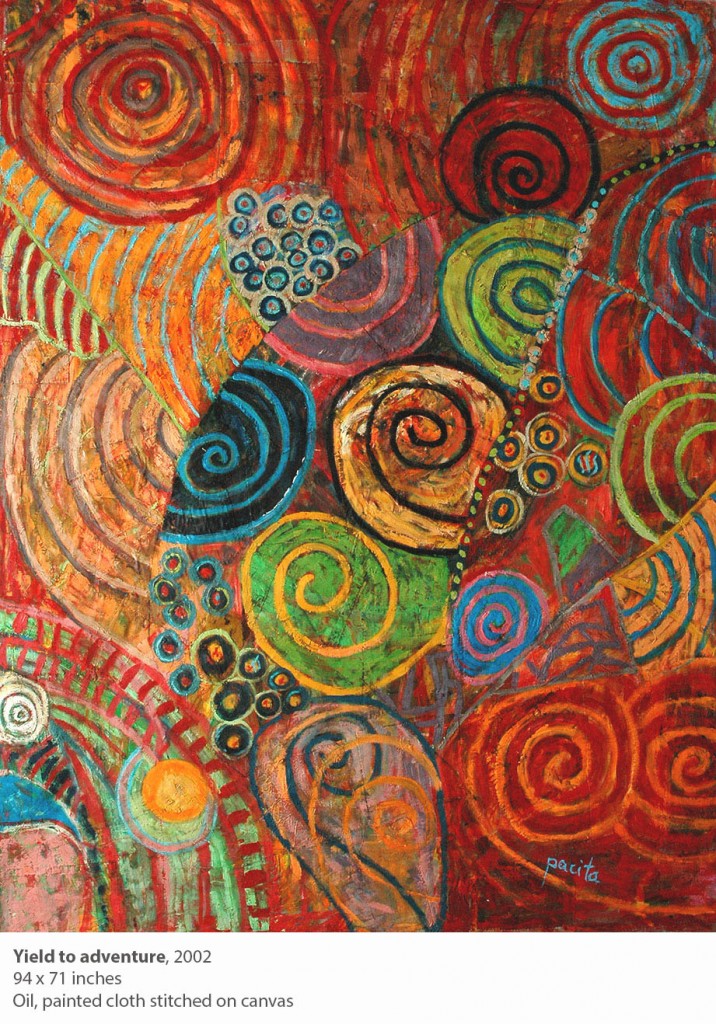 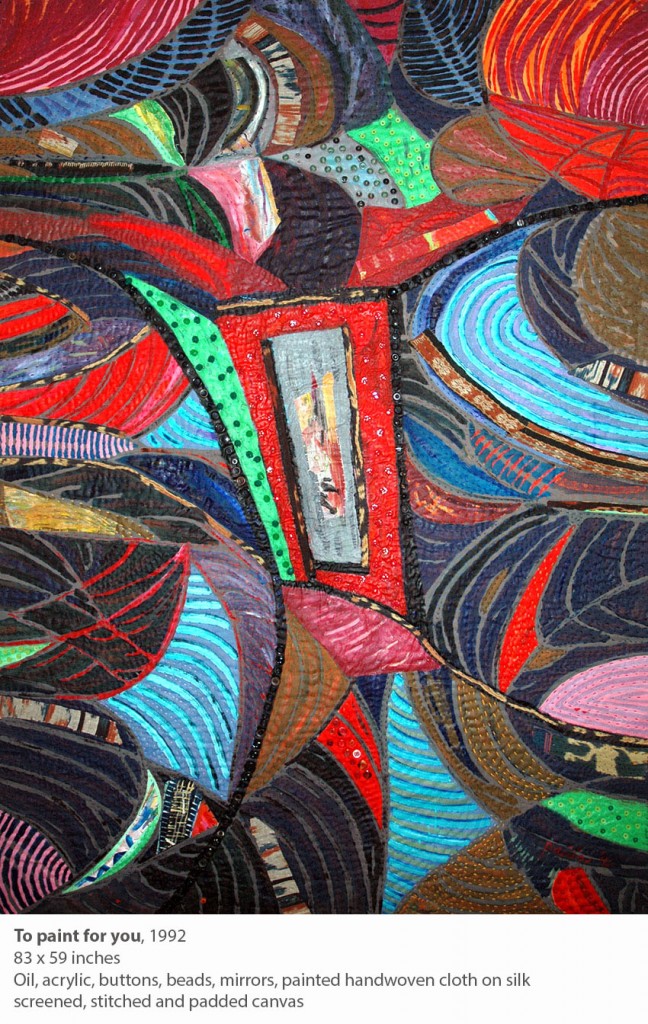