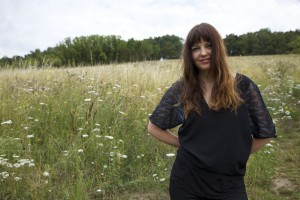 Lily Hibberd is an artist and writer, living between France and Australia. Her interdisciplinary practice centres on performance, writing, painting, photography, video and installation.

Lily’s projects are developed in long-term local research, forming unique collaborations with isolated or marginalised communities, artists, scientists and historians. In this way her work seeks to reconnect forgotten or disconnected memories, people and histories. Memory, time and light: the three primary and inseparable subjects of Lily’s work since the late 1990s. For Lily, memory, or rather forgetting, can be reconstituted or reinvented in the process of creating new situations through art. Her exhibitions and collaborations thus provide a conduit for people to encounter the past, often their own.

As an overview, this sequence begins with the exhibition Burning Memory (2001), a theatrical installation of paintings, restaging the event of a house fire as if it had been cinematically remembered. Blinded by the Light (2003) is an installation of photoluminescent paintings that chronicles cinematic encounters with light. Between 2011 and 2013, Lily collaborated with aboriginal filmmaker Curtis Taylor, working with his home communities in the remote Western Desert of Australia, culminating in the video installation The Phone Booth Project, which tells the story of the arrival and adaptive use of western telecommunications in this remote place from the point of view the people living there.

Lily completed a PhD in Fine Art in 2010 at Monash University Australia and is represented by galerie de Roussan, Paris.