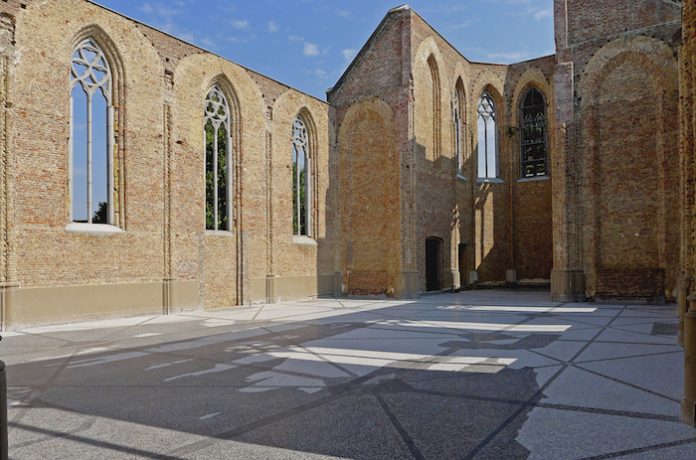 Ellen Harvey is a British-born artist living and working in Brooklyn.  She is a 2016 recipient of a John Simon Guggenheim Memorial Fellowship in the Visual Arts and a graduate of the Whitney Independent Study Program.

She was also interviewed a second time by this program (part two) which is here.

She has exhibited extensively in the U.S. and internationally and was included in the 2008 Whitney Biennial. Solo exhibitions include Metal Painting at the Barnes Foundation in Philadelphia, The Unloved at the Groeninge Museum in Bruges, Belgium, The Alien’s Guide to the Ruins of Washington DC at the Corcoran Gallery of Art in Washington DC, The Nudist Museum at the Bass Museum in Miami Beach, Ruins are More Beautiful at the Center for Contemporary Art in Warsaw, Poland, Mirror at the Pennsylvania Academy in Philadelphia and A Whitney for the Whitney at Philip Morris at the Whitney Museum at Altria in New York.  She has completed numerous commissions, including Arcadia for the opening exhibition of the Turner Contemporary in Margate, UK and permanent public works for New York Percent for Art, New York Arts in Transit, the Chicago Transit Authority, the Philadelphia International Airport, the Federal Art in Architecture program and the Flemish National Architect.

Her Belgian project Repeat, won the Wivina Demeester Prize for Commissioned Public Art in 2016.  She is currently working on Atlantis, a new permanent installation commissioned for the renovation of the Miami Beach Convention Center.  Her work has been the subject of several books including New York Beautification Project, published by G. R. Miller & Co. in 2005, Mirror, published by the Pennsylvania Academy in 2006, Ellen Harvey: The Unloved, published by Hannibal in 2014 and Ellen Harvey: Museum of Failure, published by G. R. Miller & Co. in 2015.  She is represented by Danese / Corey Gallery in New York, Locks Gallery in Philadelphia, Meessen de Clerq Gallery in Brussels, Belgium and Galerie Gebruder Lehman in Germany.