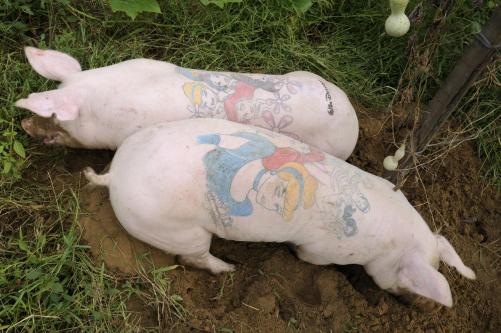 Lissette Olivares and Cheto Castellano are the co-founders of Sin Kabeza Productions, a collective of activist researchers that work together as a symbiotic team. Their name translates as “without a head” and reflects the collaborative and non-individual aspect of their collective production. The work they do consists of transmedia storytelling, where they create hybrid media cultures that activate their concerns. Told from a post-colonial, feminist and ecological perspective, these stories work as models for envisioning a world where political and cultural hierarchy, as well as rationality, are abandoned in favor of a new, creative capacity to respond to the complex environmental and cultural challenges facing our contemporary society. Their recent projects, including Kiltr@, Art Farm Revisited, and SEEDBANK, develop transmedia methodologies for multispecies storytelling using visual anthrozoology, video installation and architectural design.  In 2012, Sin Kabeza Productions was recognized for their activist arts practice through A Blade of Grass Foundation’s inaugural Artist Files Fellow Program. In 2013 they spent a year working towards the rehabilitation of Indian or Pariah Dogs in Goa, India, which led to the encounter of their current canine love and companion, Matsya. Most recently they finished a documentary about their 2012 residency in Germany titled Affective Encounters on and off the dOCUMENTA(13) Trail, which documents intense affective experiences that were mediated through unexpected narrators including themselves, the exhibition venue, d’occupier Robinson Miquele, an immigrant street artist, and Eriza, an orphaned baby hedgehog that was premiered at Havana’s International Festival for New Latin American Cinema. In 2015 they premiered an OPEN TV feature on Carrie, who has been called the most talented doggie dancer in the world. Currently they are working on a “dogumentary” and travelogue of Cuba featuring cinematography by the newest SKP collaborator, Matsya and are raising four orphaned raccoons, who are predominantly figured in the recent project Performing Posthumanist Maternalisms, and in their investigation of  Posthumanist Design and Architecture.

Lissette Olivares is an artist, activist, curator, and transmedia storyteller that is committed to speculative feminism. Her work as an artist-agent investigates the realm of human, animal and ecological exploitation and liberation through diverse technologies including creative writing, performance, intervention, experimental video, architecture, design fiction, and multimedia installation.

Currently she is in the midst of a project that is tentatively titled Performing Posthumanist Maternalisms, a transmedia story that engages feminist science studies across writing, photography, video, painting, and installation and which reflects upon transspecies kinship.