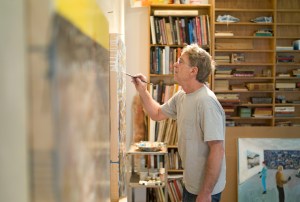 William Wegman was born in Holyoke, Massachusetts, in 1943 and received a BFA from the Massachusetts College of Art, Boston and an MFA from the University of Illinois, Urbana-Champaign. His work has been exhibited extensively in both the United States and abroad, including solo exhibitions at the Walker Art Center, Minneapolis (1982); San Francisco Museum of Modern Art (1988); Whitney Museum of American Art (1992); Museum of Fine Arts, Boston (2001); and The Art Gallery of Ontario, Toronto (2002). The retrospective “William Wegman: Funney/Strange” was held at the Brooklyn Museum, and traveled to the Smithsonian American Art Museum, Washington, D.C.; the Norton Museum of Art, Palm Beach; the Addison Gallery of American Art, Andover; and Wexner Center for the Arts, Columbus (2006-07).

The book William Wegman: Writing by Artist was edited by Andrew Lampert and published in April 2022 by Primary Information. The first collection to focus on Wegman’s lengthy and deeply funny relationship to language, the book is filled with over 300 previously unknown and wildly entertaining texts, drawings, and early photographs spanning the early 1970s to the present.