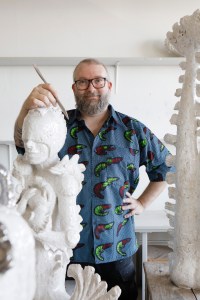 Sakari Kannosto (Finnish, b. 1973) is a multimedia artist working in Helsinki, Espoo and Vantaa Finland, with a primary focus on ceramic sculptures and large-scale installations. His fantastical and figurative creatures are inspired by fables, Greek mythology, and Finnish folklore. As he sculpts part human, part mermaid, part animal beings, he references the Finnish myth that animals can shape shift, traveling between worlds as protectors. Imbued with whimsy and humor, Kannosto’s work is also underscored by a deep environmental consciousness. By reimagining a future where humans unite with nature to create adaptive, survivalist families, Kannosto addresses the potentially disastrous environmental consequences brought on by the industrialized world.

For Kannosto, clay is crucial to the actualization of his work. As an ancient medium, it has long been a conduit for coded information. He continues in this vein, luring magic out of the clay as he creates a cast of creatures for modern fairytales. There is something deeply hopeful here. Kannosto graduated from the Academy of Fine Arts of Helsinki in 2005. In 2014 he was granted an honorary award for environmental education due to his work as a lecturer and educator. After completing an artist in residence at the Arabia Art Department in Helsinki, he became a permanent member of the department in January of 2020 and is now the chairman of the board. He is a Lecturer of Fine Arts at Omnia in Espoo, and has exhibited widely. Notably, his work can be found in the collections of the National Museum of Finland and the Art Museum of Tampere.